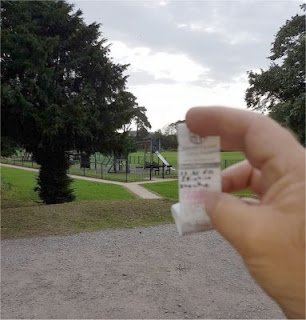 I slept well; over brekkie I watched the second episode of “Uncle” that the Sky-Plus box had found for me, then sparked up my lap-top. I had an invite to a party in a couple of weels time, but unfortunately I’m working that night. If only I’d had more notice about it.
I had an email from Geocaching dot com – apparently I got an e-souvenir last week. I’ve no idea how. And with nothing else going on in cyber-space I set off to find my car. Ideally I would have parked it outside my house, but someone else parked their car rather thoughtlessly there on Monday and has left it effectively blocking two parking spaces. I expect they’ve parked it there and gone on holiday on the EuroStar. Certainly a cheaper option than paying car park charges.

I got in my car and set off to work. As I drove the pundits on the radio were discussing the Government’s announcement that they are undertaking a study to find out just how many EU citizens are working in the UK and to find out exactly what jobs they are doing.
I would have thought that this was something that the Government should have done years ago. There was an interview featuring some old windbag from the Government (don't know who he was) and from what I could work out, the general feeling of the Government was that the European citizens are probably doing the sort of jobs that the British simply don't want to do. The implication was that in a few years’ time the likes of Costa and Starbucks will close down and the hospitals will get dirtier and dirtier because the EU citizens will have been sent home, and the Brits don't want to work in jobs like that.
However (to be fair) I could have misunderstood what was being said; the chap speaking did mumble and mutter. You would think the BBC would sound-check these people, and if their voices are incoherent they wouldn't allow them on the radio.

As I had a few minutes spare I had another (third) look for that geocache for which I got the clues in Aylesford cemetery a little while ago. I'd had a hint from a friend, and I found the thing. Mind you my piss boiled. There was a playpark not twenty yards away from where the cache was hidden. I get so wound up by this sort of thing. I've tried to hide so many caches and had them turned down because a playpark was within a hundred yards, and now this is yet another one almost on top of a kiddies play area.

Once home we walked the dogs round the park. Treacle charged off into the distance as Fudge straggled behind.
I wonder what’s for dinner…