I woke dripping in sweat and feeling like death warmed up shortly before four o’clock, so taking great care not to wake the babies I crept downstairs and sat in the garden drinking a tin of Doctor Pepper as the dawn broke. In the past when I’ve watched dawn break the birds’ dawn chorus is rather beautiful. Today it was just seagulls shrieking. I don’t know why we’ve got so many seagulls locally; the closest coast is fifteen miles away.

I went back to bed, turned on the fan, and slept rather better for a few hours.

I came downstairs for a second time, let the puppies outside, and now that it was light saw the washing that had hung outside overnight.

I made toast, sent out three birthday videos, and had a look at the Internet. It seemed that yesterday’s geo-meet wasn’t that well attended. Admittedly the location was against it, but a friend I met through geocaching had a birthday today and looking at some of the photos of memories being posted made me sit up and think. Back in the day there would be close on fifty people turning up to the monthly meets. I (and others) would suggest meeting up for a walk and we’d often get fifteen to twenty people along.

But now… has the thing run its course like scouting, snake-herding, astronomy and kite-flying? Today marks ten years since I found my first ever plastic pot under a rock (at Kingsnorth Church). Is it time to look for another silly waste of time?

I then went back out to the pond. Having pretty much established that the UV bulb was the cause of my electrical issues I unplugged everything and opened it all up. Quite a bit of stagnant water poured out of the electricals. That would be the cause of the short circuit, then.

Leaving “er indoors TM” with the dogs I drove down to World of Water at  Rolvenden where I got a new pond filter. Rather smaller than the old one though: to be honest the old one was far too heavy when it came to emptying and cleaning. Hopefully the new one will be more manageable. I also looked at the pre-cast waterfall features they had. I saw the very one I wanted, but at nearly four hundred quid it can wait for another time. I shall have to save up

I brought the new filter home, and once we’d had a spot of lunch (“er indoors TM” had been baking) within a few minutes it was plumbed in and filtering like a thing possessed. I cleaned the old one and got it ready for the tip tomorrow, then had a little look at the Internet.

This morning a geocache had gone live in some woods mid-way between home and Canterbury. It still hadn’t been found by late afternoon. The temperature was cooling slightly and the dogs needed a walk, so we thought we’d try for a cheeky First To Find.

We got to the designated sport from where we had to follow a footpath for seventy paces until we found a big hole. At seventy paces (of my paces) I could see a humungous hole a few paces on… that would do. We then stood with our backs to this hole and looked in the right direction where we could see something fitting the description of that for which we were looking. And behind it was the cache. With a blank logsheet. We were First to Find – go us!

From there we had a little walk round the woods. We’d not been walking in these woods before; they were rather pretty. As we walked we met a pair of walkers coming the other way who put their dog in the lead when they saw us. My heart sinks when that happens; the etiquette is that you too put your dog on a lead so that they can all snarl at each other as they get dragged past. Whereas if off the leads things are generally much more sedate. But before we could lead them, the puppies flew up to say “hello”. I pulled out my whistle, gave it three sharp blasts, and (would you believe it) both Morgan and Bailey stopped dead, turned, and ran back to me. When the whistle training works it is incredibly impressive, and other dog owners who don’t know me stare in amazement as though I have the best trained dogs in the universe. What with the FTF and dogs doing as they were told I felt incredibly smug as we walked the rest of the way round the woods.

It was only a shame that Treacle and Bailey found chest-deep (on Treacle) stagnant mud in which they both wallowed.

We came home and as “er indoors TM” showered the mud from three dogs (Morgan wasn’t entirely spotless after the walk!) I had a look at the pond filter. Disaster… the filter box was dripping. I’ve had a little think (it hurt!) and the smaller box is possibly a tad too small for the volume of water coming from the pump. To be honest I thought this might be the case, and I’ve rigged up some guttering to collect the overflow. When I get a minute I shall get another filter box and a splitter and spread the pump output between the two boxes.

I shall ask for a day off in the week. Bet I don’t get it…
Posted by Manky Badger at 9:30 pm No comments: 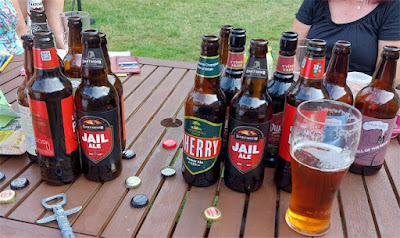 I woke at seven o’clock to the sound of next door revving his motorbike. When I had a motorbike (over the years I’ve had four) I would use the thing as a form of transport; driving all over the place on it. I understand that my biker friends do the same. But him next door seems to enjoy revving the thing to make a noise and make a smell.

Each to their own, I suppose.

A couple of weeks ago I mentioned that the number of people on my Facebook Friends had gone down by one. Someone had de-friended me and consequently became a “Facebook Enemy” (I don’t make the rules!). This morning as I scoffed my toast I found out who it was.

Five years ago I found a dog running loose in the co-op field. He followed us into William Road and started running in the road. I managed to catch the dog with the help of “a passing nice lady (with small children)” and after all the excitement the “a passing nice lady (with small children)” joined the elite group of over six hundred people on my Facebook Friends list. This morning I saw she’d posted on one of the local groups, and that I had the option to add her as a friend. Oh well… her loss… (!)

I also read a lot of whinging about waiting times in A&E departments across the country. Forty years ago in his autobiography Dr Robert Clifford (a west country GP) once wrote that out of every hundred patients he saw, ninety get better and eight died regardless of anything he did. He felt the clever part of his job was spotting the two per cent over which he could have any effect.

Surely now the focus must be on getting the ninety per cent to stop clogging up the system?

I hung out the washing, then had a little look at the pond filter. With the UV bulb unplugged it had all worked fine all week. I changed the plug on the bulb, turned it all on again, and within minutes the power had all tripped out again. That was a pain in the glass.

We then drove off up the motorway and the A249 to see Karl and Tracey. The original plan for the day had been the geo-meet in Sheerness, but as we got closer to Sheerness it was obvious that it was going to be too hot for the dogs there; especially as the meet was a kilometre’s walk from the car park and on a beach. Instead we sat in the garden where one beer led to another and the afternoon just flew past.

A “couple of hours” became somewhat vague and ended up sending out for Chinese and getting home at midnight
Posted by Manky Badger at 9:40 am No comments: 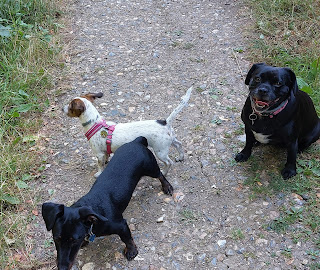 With no need to be up at silly o’clock this morning I had the chance of a bit of a lie-in. Or so I thought. Treacle started deliberately bashing me on the head about ten seconds after “er indoors TM” got up. If ever a dog was saying that it was time to get my carcass out of its pit…

I got my carcass out of its pit, made toast and got just the teeniest bit depressed as I looked at Facebook… Some people with whom I used to be close ten years ago were posting from the field of Portsmouth Kite Festival. I miss the kite festivals. And other friends were off to Piratemania; yet another big geocaching event about which I knew absolutely nothing.

It turns out that not many other local hunters of Tupperware knew about Piratemania either.

I got the leads onto the dogs and we drove down to Orlestone Woods. Despite there being a lot of cars in the car park we only met one other person as we walked. The walk went well; as we went I practiced the whistle training. Bailey really seems to have mastered it. Treacle does it somewhat half-heartedly. And Morgan hears the whistle and comes back some time in the next few minutes when he’s finally finished whatever it was that he was doing. We tried to pose for a photo, but it wasn’t happening.

We came home and I wrapped “er indoors TM”’s birthday pressies. Eventually. Once I’d found scissors that actually cut (and not chewed) the wrapping paper. Some bright spark could make a fortune by creating scissors that are razor-sharp and cut things rather than most scissors which are marginally more blunt than my arse.

I then wrote up a little CPD, and just sat on the sofa with three sleeping dogs until it was time to leave for work… and that was it for today. I drove the thirty miles to Pembury, did my bit, and drove home again. I don’t dislike my job, but it’s not as riveting as it might be.

Posted by Manky Badger at 10:57 pm No comments: