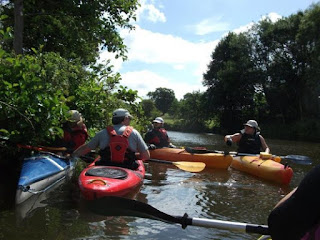 I suppose it’s not surprising that I slept well. What was originally intended to be a rather small barby turned out to be something far more judging by the carnage I came down to this morning. I set the dishwasher loose on more plates and bowls and glasses, and had a spot of brekkie. It didn’t take long to program “Hannah” for the day’s outing, and then I checked the weather forecast for the river Medway. Mind you I’d spent all day yesterday intermittently checking the weather forecast for my back garden and whilst it was wrong in specifics it had been right in general. There had been rain showers during the day; they just didn’t come at the exact times the forecast said they would.

Whilst I waited for "er indoors TM" to emerge from her pit I stared into the Internet. Whilst I’d worked yesterday some people had been finding my geocaches. A few people had been out on my (soon to be archived) cache series near Bethersden and had said nice things about it. Despite my having been assured the cache I hid near the outlet centre had gone, a German chap managed to find it yesterday.

We settled the dogs, loaded up the car, and set off to Teston. As we drove I was speculating on getting a solid kayak (as opposed to an inflatable one) and I was wondering if we strapped it the roof rack of my car, would it go under the barrier at Teston bridge country Park’s picnic site. We arrived to find Sam and Mark taking the canoes off of their roof rack as they wouldn’t go under. That answered my question.

It didn’t take long to get the kayak inflated, and we were soon on the water heading upstream. Eight of us (in six boats) targeted eleven geocaches along the river which needed to be accessed from boats. The first four on our trip were ones I’d done from a kite festival at Teston a few years ago. We failed to find a couple of those, but of the seven I could claim, we found six. As we sailed we saw no end of yachts and power boats moored up along the Medway; hundreds if not thousands. There is no way even one per cent of those boats could all go sailing at once. I suspect for every one boat that is ever sailed up the Medway, fifty are moored there so’s the owners can sit on them whilst sipping Pimms in the sunshine.
As we sailed, other boaters passed us in various directions. All were civil *except* several dozen canoeists all bearing signs saying “London and SE Marathon”. All of these invariably flew past at breakneck speed, shouting at all and sundry to get out of their way. Some of them got less than effusive replies from us…

Despite scoffing gingerbread men as we went, sailing was hungry work. After three miles we got to Hampstead lock where we came ashore and had a picnic lunch. Coming ashore was not as easy as it sounds; as we’d paddled my legs had gone to sleep. When we came to the jetty I was completely numb below the waist.
Fortunately feeling returned, we scoffed lunch and we realised we were only a hundred yards from a terrestrial geocache. It would have been rude not to have gone to get it. Just as we were getting ready to sail back a little old lady asked if there were footpaths to Wateringbury; she’d just got off of the train a stop too early. Woops.

Sailing back to Teston was a tad easier that sailing out had been; we were going with the flow of the river on the way back. Once at Teston we played on the canoe pass – a series of two rapids to allow canoes to pass the lock. But again I’d gone numb. I am reliably assured I exited our kayak looking like a walrus.
We lugged the boats back to the cars and got tidied away. Nick got us all tea and coffee which was very welcome. Some of our party then when to hunt down the caches in the Teston area; we’d found them years ago so we came home.
I took a few photos as we sailed. It had been great fun. I wonder when we can go again?

Once home we walked the dogs. Usually we would go to the park, but the “Create” festival had taken the park over this weekend. So we walked along the paths to the Stour centre and back again. We were worried that this wasn’t enough of a walk for the dogs, but both seemed suitably worn out when we came home.

We then started to clear away the stuff still in the garden from yesterday’s barby. Most of it is now away; some is still wet.
And then we had burgers for tea. I suspect we’ll be having burgers for tea for the foreseeable future…