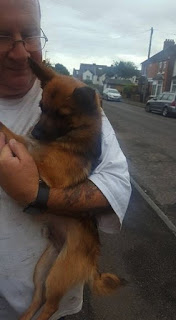 I slept well despite the dogs arguing over a bone (on the bed) at 3am. Over brekkie I looked into cyber-space. Several of my friends who work(ed) at EuroStar were having their last day at work today. New beginnings for them; always exciting. I wonder when my last day at work will be; originally it was planned to be Friday 10 September 2021. But changes to pension rules have put paid to that; realistically it will be some time in 2030 unless someone sticks the knife in (again) or if I get offered early retirement. I would take redundancy, but I once heard that the NHS doesn’t offer redundancy when you are over fifty. I wonder if that is still the case? Or even if it is true?
As I messed about with my lap-top the dogs continued arguing about bones. Mind you I say “dogs”; to be fair it was my dog who was at fault. The puppy had one bone which he wanted. I offered him five others, and still he obstinately demanded the bone she had.

I had a plan for the morning; I took the dogs for an early walk. Treacle ran in terror from every other dog we met. As we walked through the park we met a chap with whom I used to work seven years ago. I wasn’t happy when I worked there; he is still there and is thoroughly miserable with the place.
As we carried on through the co-op field we met another dog. I can only describe him as my grand-dog Rolo’s big brother; a sort of yorkie-chihuahua cross. He played very nicely with my two and followed us all the way across the field. And then on into William Road. I tried to chase him back into the field, but he wouldn’t go. I asked a couple of passers-by if they knew the dog; they didn’t. It was at this point that he ran into the road…
A passing nice lady (with small children) held up the traffic whilst we (eventually) captured the small dog. He took some capturing. And once I was holding him I then wondered what to do. He had no collar or any form of identification. So I carried him to the vets in the hope that he was chipped and that they might be able to scan the chip and find out where he belonged. He wasn’t heavy, but carrying him did my arm no favours.

Leaving our new friend at the vets I brought my two home through the pouring rain. We’d been home long enough for the dogs to eat their breakfast when my mobile rang. It was the vets; they’d contacted the missing dog’s family and he’d been collected already.

I looked out of the kitchen window. Torrential rain. So much for my plan. I had intended to get the walk done and the lawn mowed before the rain hit, and even some garden trivia done but no such luck. Instead I pootled about a bit before setting off to work for the late shift.
As I drove the pundits on the radio were wittering on about the latest developments in Aleppo. I didn’t really want to depress myself with an update on a war zone, so I turned off the radio and sang along to Kate Bush, Sparks, ELO, Carly Simon, BA Robertson and all sorts of stuff.
As I drove the weather cheered up somewhat, so I took ten minutes for a spot of geocaching. One cache was cleverly hidden on a pavement; the other had originally been idiotically hidden by a scout hut but had clearly vanished.

A spot of McLunch, and then off to work for the late shift. It was surprisingly busy…