As I drove home this morning after a rather busy late shift the pundits on the radio were interviewing the lieutenant-governor of Texas. He was talking about the recent floods in Houston following the hurricane. He made a very interesting point about the local politicians. Those who'd turned up to help were being criticised for using the tragedy to court publicity. Those who hadn't shown their faces were being lambasted for staying away. As the lieutenant-governor said, what *are* the politicians supposed to do?
Some idiot woman then talked about the public’s reaction to the floods on the “Thought For The Day” thingy. She was crystal clear that God was in no way accountable for the floods; "nature" was well known to be capricious. But God could be seen in the actions of people helping others in the aftermath of the disaster.
Apparently.
How can these people see a God in all the good whilst ignoring all the bad?

I came home where "er indoors TM" was rather disrespectful to the new suitcase I’d bought last night on the way to work. I then met up with "Daddy’s Little Angel TM" and "Stormageddon - Bringer of Destruction TM"   and we took the dogs round to the park. For once Fudge kept up. Mind you we had a worrying five minutes when playing on the zip line. We'd lost Fudge.
He eventually turned up playing in the river. He likes playing in the river. I wish he wouldn't wander off on his own though. How do you explain to a dog that he should stay close?

With dogs walked I went to bed for the day. As I slept I could feel the puppy laying next to me. It is odd; she is much more settled when sleeping during the day than ever she is at night. Mind you what with the house phone constantly going off, and the noise of the torrential rain didn’t give me quite the good day’s sleep I had been hoping for.

After five hours attempted sleep I got up and had a bit of late brekkie whilst watching this week’s episode of “Dark Matter”. It was the last episode of the current season, and I watched I with very much an air of “WTF is going on?”. No decision has yet been made about whether there will be a fourth season. I hope there will be; for all that I have no idea what is going on, I quite like the show.

"er indoors TM" should be home soon. I’m hoping she’ll boil up some dinner before I set off for another night shift…

Posted by Manky Badger at 5:57 pm No comments: 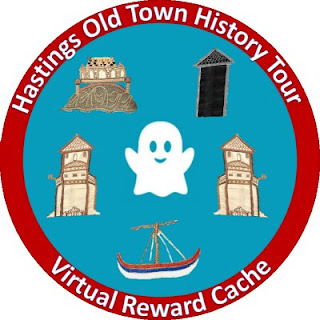 Another good night’s sleep, only marred by one or other of the dogs shoving a wet nose up my bum at 7am. I got up and over brekkie I looked at the Internet. It was working today, and looking at the geo-map I had an idea. Could I get a First to Find on a virtual geocache? There hasn’t been the chance for one of those locally for over ten years.
Last night a new virtual geocaches had gone live in Hastings Old Town. Geocaching HQ have given the (supposedly) top four thousand geocache hiders the ability to create a virtual geocache. I wasn’t one of the top four thousand; I actually wrote to Geo-HQ and formally complained. Having spent over a thousand hours on my Wherigos I was a tad miffed to be trumped by a film pot under a rock. I wasn’t expecting any reply, but I got an apology from them which basically said that the process they used to judge people turned out to be somewhat flawed. I sulked a bit (a lot) but I had this idea that even if I wasn’t good enough to be given one of these special caches, I might claim First to Find on one.
This one in Hastings Old Town was smack-bang in my old stomping ground. I know Hastings Old Town like the back of my hand, so this would be easy (I mistakenly thought). So I messaged my old colleague in Tupperware Gordon, and soon enough we were on the case.
It was a rather good tour for visitors… so much has changed in recent years and there is so much there that even the locals don’t realise. A shame about the hills, but as an ex-local you can’t visit Hastings without experiencing the hills. We got round in about half an hour – and got to be joint first one to find it as well… Can you claim FTF on a virtual? I wondered about the etiquette, and in the end just claimed it.
There are a few photos of our adventure here – what with having a lot less days off mid-week I’ve missed my walks with Gordon and Norton.

We climbed back up the hill where we said our goodbyes. Five minutes before we got back to our cars the forecast rain hit. By the time I got to my car I was soaked.
As I was in the area I popped in to see my mum and dad, and whilst I was there I had a phone call. "Daddy’s Little Angel TM" was distraught. The company for which she’d been working had “let her go” as she didn’t fit in with their working environment. Bearing in mind the company were encouraging her to drink shots and take lines of cocaine as she worked, I am glad that she didn’t fit in with their working environment.

I got home. I had planned to get my new lawnmower out, but the rain was torrential. I watched an old episode of “Dad’s Army” that the SkyPlus box had recorded for me and then went off to bed for the afternoon.
I’m off to the night shift now…

Posted by Manky Badger at 6:20 pm No comments: