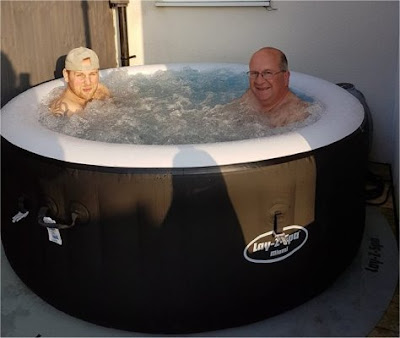 Posted by Manky Badger at 9:07 pm No comments:

Over a bowl of granola I watched the last ever episode of “Still Game”; another really good TV show that has been missed by the masses.
I then sparked up my lap-top to see what was going on in the world. Facebook was something of a disappointment this morning. For all that I persevere with it, more and more it is becoming a second-rate version of eBay with people trying to sell stuff that in years gone by would have gone to a jumble sale. Mind you I did see one advert from the “Christian Leaders Alliance” offering me the opportunity to get ordained. I did laugh; I’ve already been ordained. I am actually an ordained minister in the Universal Church Triumphant of the Apathetic Agnostic (“We don’t know and we don’t care”).
I yawned and stretched a bit (to the obvious bewilderment of the dogs) and got myself ready for the day.

We set off for Tenyham. As we drove we listened to Radio Ashford as a good friend was presenting the morning show. However it was a shame that his -um- guest -um- presenter -um-was -um-quite -um- so -um- hesitant. It didn’t make for a good show.

We stopped off on our way to hunt out a geocache we’d previously failed to find. Seeing that others had found the thing recently we wondered where we’d gone wrong. I found it after a couple of minutes. The rules of sticking film pots under rocks say that the things can’t be buried. I wouldn’t say that this one had been *actually* buried, but it had been shoved into the soft earth until the top of the thing was at ground level, and then had a load of soil dumped on it.

We were only a couple of minutes meeting up with Karl, Tracey and Charlotte, and we had a rather good walk from Tenyham out to Lynsted and back again hunting for film pots that had been stashed under rocks. Some were found easily, some were rather tricky. One involved sending "er indoors TM" up a tree, and one wasn’t there (or so we decided).
We planned our route so we would call in to the Black Lion in Lynsted over lunch time. We’ve popped in there on our last two walks, and hadn’t been disappointed. Today was similarly good, but there’s no denying that both the dark ale and the mild were past their best. Mind you the light ale was OK – I had two pints just to be sure. It was a shame that there was a child there who was terrified of dogs; if you just pat my hounds and say “yeah whatever” to them they soon clear off. But if you sit behind a bush waving a rag doll at them and then scream when they come close, they are going to think it is some sort of game.

I took a few photos whilst we were out. Today was a glorious day to be out. As we headed home my phone beeped. Someone had been walking the series of geocaches I hid last week. They hadn’t been able to find the one near the railway crossing. As it would only be a ten-minute diversion, we went to check on it. Sure enough, it was missing. I replaced it, but am left wondering what happened there. What happened to the original? I shall wait to see if it goes missing again.

Once home I had a go at doing all the geo-admin that one does after having found a film pot under a rock. I have a rather good gizmo on my lap-top that does it all for me. Yesterday I downloaded the latest version of the software and it didn’t work any more. Fighting with that wasted half an hour.

I spent the evening ironing shirts whilst watching last week’s episode of “Victoria”. I do like period dramas, but I have to remind myself that a lot of it is made up. Did Queen Victoria really hare Lord Palmerston?
I wonder what history courses Coursera offer?

Posted by Manky Badger at 9:11 pm No comments:

I slept like a log last night; such a shame that the dustmen have to be quite so noisy at five o’clock. They send people to move the bins so that it is easier for those bin men coming later with the lorry to get at the bins. Personally I would have thought sending the advance party a few minutes ahead of the bin lorry would have been a better idea than a few hours, but what do I know.

Over brekkie I watched the last two episodes of “Love Death and Robots”. I’ve seen all of them now – all *very* good. There’s no mention on-line of a second season yet. I remain hopeful.
I then had a little look at the internet as I do most mornings. Nothing much had happened overnight, and with no emails no getting deleted I finished off the current module in my Coursera course. I then amazed myself by passing the test on the first attempt.

I then left the house some two hours after the bin men had woken me. "er indoors TM" informs me that the bin lorry came round between half past seven and eight o’clock.

As I got in to my car to go to work I was very conscious that the original plan for this morning had been to be coming home from the night shift which I had swapped. Being at home today on what liked being a rather bright day was suddenly rather appealing.
I was also very conscious that the original plan for today was so-called "Independence Day" when Brexit would have come in to effect. The pundits on the radio were interviewing all sorts of people about the latest developments on that front. It would seem that after nearly three years of bickering and squabbling, Brexit will now ultimately be decided by whoever is stupid enough to become the next Prime Minster now that Mrs May has thrown in the towel.
I can see this dragging on and on...
On a more positive note, the pundits on the radio also announced that official figures just released say that with three weeks to go until Easter, one in four British adults have already scoffed at least one full-sized Easter egg. I haven't done so yet... perhaps I should?

I got to work and read my Kindle until it was time to leap in to action. I do that from time to time - it confuses my colleagues. Break time was good today. Working in a laboratory with blood and stuff means we can't have a cuppa as we work; we have to go for formal breaks. Someone had brought in cakes to celebrate her birthday. Quite a few cakes. You can't go wrong with too much cake. And I would have missed cake had I done last night's night shift.
As I scoffed cake so my phone beeped - an email. My camo tape had arrived in the Amazon locker just up the corridor from work (about ten yards up the corridor!). I went there, entered the combination I'd been given, and a door opened so I could get my parcel. It all took about ten seconds, and walking back to work I found I was disappointed. I don't know what I was expecting from the Amazon locker, but I was expecting more.

Once home I got out the drill and bored a hole in my fake apple (as one does), then carried on putting my camo tape to good use. Pausing only briefly to chuck cough mixture all over the floor "er indoors TM" boiled up fish and chips which we scoffed whilst watching this week’s installment of “Star Trek: Discovery”. Both were rather good…

Posted by Manky Badger at 9:23 pm No comments: