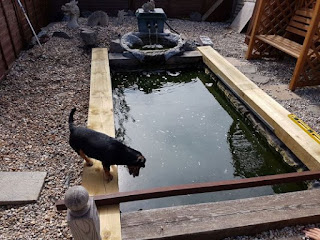 I had a terrible night’s sleep. After about three hours sleep the puppy decided that the best part of the bed was wherever I was, and as I moved about so she moved too. I tried to get some shut-eye, but gave up shortly after 6am. It was as well that I did; the dustmen came up the road shortly after that, and they are incapable of making a noise quietly.
Over brekkie I sparked up my lap-top and had a look into cyber-space. Little had happened on Facebook overnight, but I saw that a colleague had resigned to take up a postgraduate position at Canterbury university. I suppose it is a sign of the times that these announcements are made via social media. However this leaves a vacancy in a senior position at work. Should I apply? The money would be nice; money is tight at the moment. But I’ve been in these senior positions before. I didn’t like it much then; mind you it was for another employer under a very bullying regime. Things might be different where I am now. But on the other hand I’m reasonably content doing what I’m doing right now,
Will I apply… I doubt it.

I saw movement outside the house – a car had driven away. I drove my car down to that space so we could get the sleepers out, and as I waited for "My Boy TM" to arrive I wrote an email of complaint to Wickes about the abysmal service at their Maidstone branch yesterday. I doubt anything will come of it, but I felt better having had a whinge at them.

I got bored waiting for "My Boy TM" so I sent him a little chivvying message. That woke him up; he gave me instructions for what I might do until he arrived. He soon arrived, and we got busy doing some preparation for tomorrow’s pergoling.
We got the new sleepers into the garden, and got them bolted together and level. That took some doing, and then we attached the brackets for the pergola’s uprights. Thirty seconds to write; just over two hours to do. But I was quite impressed with the progress.

We could have done more work, but I’d heard reports that there was bad congestion on the way to work. I set off to Maidstone shortly after 11am. Two hours later I got to work…

I had a text message from the passport people this afternoon; they’ve received my old passport.