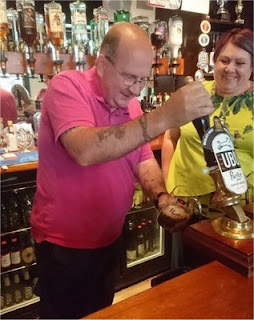 Another good night’s sleep. I’ve got a theory that I sleep better when *on* rather than *in* the bed. I got up shortly before 6am and watched an episode of “Dark Matter”. It passed forty minutes in an entertaining way, but the “time loop” story is one which various genres of sci-fi have done to death before.

I sparked up my lap-top to see if I’d missed anything overnight. Looking at Facebook I realised I missed a meeting of the astro club last night. I say “missed”; I had no intention of going. Following years of behind the scenes nastiness I decided to walk away from the thing in February, and my decision was reinforced on 10 June at a party when a couple of astro club members turned up who (for at least three years) have been making a point of blanking me whilst being effusive around everyone else.
A crowded room can be really lonely sometimes.
Whilst most people in the club are aware of this, no one has been prepared to do anything. Having everyone watch this happening and then tell me how rude this pair had been and how their behaviour was unacceptable got rather old rather fast.

The roads were wet as I drove to work, it had been raining heavily overnight. As I drove I listened to the radio as I so often do, and I got a bit cross. . Following the resignation of the head of Kensington council there is some consternation that there isn't anyone in charge of what is going in in the aftermath of the fire, and there is speculation that the government will appoint someone.
The pundits on the radio were interviewing some woman who claimed to be representing the" Justice for Grenfell Towers" organisation. This woman was amazing; she was dead against the government appointing anyone. The area apparently needed someone who was representative of the locals. She was adamant that the head of the council hadn't represented the people of the area at all, and when the interviewer pointed out that this chap had won an election to get his post, it was obvious that this woman had no idea what local elections were all about.
Clearly democracy is wasted on the public.

There was an iffy five minutes as I drove up the slip road at junction five of the motorway. A mini flew past me at breakneck speed, closely followed by another. They might just have both been in a hurry, but it did look as though the driver of GF17 HHO was desperate to catch up with the first mini to win their race.

I stopped off at Aldi to use their cashpoint machine, and got to work with a few minutes to spare. With time on my hands I popped in to the hospital's Costa for a second brekkie. I had a coffee (overpriced) and a croissant (cold and stale).
Ironically just as I walked to the department I found a cashpoint machine not twenty yards from where I work; and it doesn't charge either. For months I've been going out of my way to get cash.

I did my bit, and came home. Slowly. There was a speed limit on the motorway, and five miles south of Maidstone the north-bound carriageway of the motorway had the traffic stopped and loads of police officers walking about the place.
I wonder what that was all about.

Once home we scoffed a piccalilli sandwich and then (in a novel break with tradition) *I* drove us down to Hastings to spend an hour or so wth my brother. I’d not seen him for ages; we put the world to rights.
On the way home I saw that petrol was six pence per litre cheaper in Sussex than in Kent. I filled my car up.

We had a quick bite to eat, then headed over to the Windmill. "My Boy TM" and Cheryl soon joined us. Anne and Chip have recently taken over the running of the place. The ale selection is definitely “not too shabby”, and I got to pull my own pint; I’ve never pulled a pint before.
We’d gone to hear “Access All Areas” playing; I do like them, but tonight they sounded better from a distance. They are a good band; they *really* don’t need to crank up the volume quite so much. As my head hurt I found myself wondering. The Windmill calls itself the home of live music. There is no other pub within a mile or so of the place, but the vast majority of the people in there were friends of the band who had gone to see the band play. I wonder if the music is scaring people away from the place?
Mind you I liked the pub. I shall certainly go back for a pint or two… but when it is a bit quieter…
Posted by Manky Badger at 6:07 am