I didn’t sleep well; it was hot and my insides weren’t right last night. And I did worry about Fudge who was panting intermittently. It was a very warm night; probably too hot for Fudge.
I got up early, and over brekkie had a look-see at what was on the telly. There was an episode of “On The Buses”. I gave it ten minutes; it hadn’t stood the test of time.

Leaving "er indoors TM" and the dogs asleep I set off to Margate. "Daddy’s Little Angel TM" had been let down by a supplier or needed ice or… To be honest I don’t really know exactly what had gone awry. I was just told that I had to run her up to the cash and carry, and I did as I was told.
There are quite a few women in the family who I just obey without question (in fact I do that with all of them…)
As I drove I turned on the radio. There was some rather dull drivel being broadcast, so I turned it off and howled along to my rather personal choice of music. I had sussed out a geocache I might find as I drove through Birchington, but I couldn’t see anywhere I might easily park, so I just kept going.

It wasn’t long before I was at "Daddy’s Little Angel TM"’s shop. As I walked in, she was screaming at a customer. This chap had his earphones in and was playing some frankly dreadful music at a deafening level. He was asking a question, but he couldn’t hear the answer over the noise of his music. I would have thought that the obvious solution to his problem would have been to have taken the earphones out, but what do I know?

There was something of a problem; the chap who was supposed to be on duty in the shop hadn’t showed up for work. After a while the police arrived to say he’d been stabbed (and consequently wouldn’t be in!). So, having little choice but to close the place, the shutters went up, and we drove to the cash and carry.

Have you ever been to a cash and carry? I’ve been a few times. It all sounds rather exciting, but it is just shopping; albeit on a larger scale. But the nice people there give you free coffee (which is something of a result). We loaded up three huge trollies as we went round, and eventually we struggled it all into the car park and filled the car. However when the car was full we still had a trolley full of stuff to load up. Fortunately the nice lady at the cash and carry took pity on us and said she would guard our excess. I got the impression that this sort of thing happens rather a lot.

We drove back to the shop and unloaded. I say “we”; I did most of the unloading as "Daddy’s Little Angel TM" dealt with a seemingly endless stream of customers. It was as well we’d been for supplies.
As I struggled to unload the car she commented that I wasn’t as fast as I used to be. A factually correct observation, but one I found surprisingly hurtful. I have no idea why; I’m not usually so sensitive.
And with the car finally empty I drove back to the cash and carry to collect what we’d left behind. As I unloaded for the second time, Sid the pug wandered out of the shop and got in the way as best he could.

Eventually we had all the supplies in the shop. "Daddy’s Little Angel TM" was clearly busy, so I left her to it, and came home. Just as I pulled up I had a message that "er indoors TM" and the hounds were round the park. I *could* have gone to meet them; instead I went to bed. I was feeling rather rough (for no reason that I could fathom), and I slept until I was woken by three wet dogs when they all came home an hour later.

"er indoors TM" then announced that she was going to B&Q. With absolutely nothing better to do I went with her. "er indoors TM" wanted a “water-based wood preservative”. Have you any idea just how long you can take to choose a tin of varnish? For thousands of people, going to B&Q on a Sunday is the highlight of the week. I found it rather dull.
"er indoors TM" then went varnishing in the garden. I have no idea what she varnished; I stayed inside (still feeling iffy) and put together a Lego set that I’ve been meaning to put together for months. It is a pizza van – I already have a pizza parlour in my Lego world. With a little tweaking the pizza van could become an ice-cream van. That will be a project for another day.

"er indoors TM" boiled up a rather good dinner. As we scoffed it we watched a film. I’d recorded “Fantastic Beasts and Where to Find Them” was good, but like most films it went on for far too long. It could have bee at least half an hour shorter.

Posted by Manky Badger at 9:10 pm No comments: 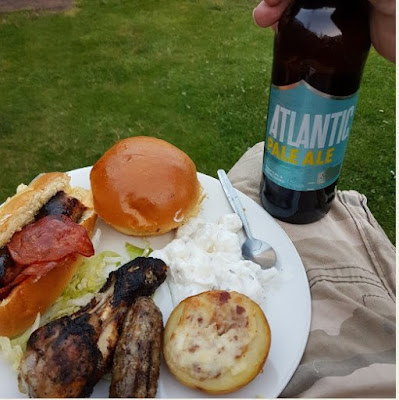 Posted by Manky Badger at 11:10 pm No comments:

I had an early night last night and slept like a log right pup until Pogo started walking all over my head at two o'clock. I say "Pogo" - it could have been Treacle. They look very much alike; even more so in the pitch darkness.

I finally gave up trying to get back to sleep, and over some toast I watched last night's episode of "Catch 22" which was again rather good. For once I didn't bother with the Internet over brekkie. Time was short, and the Internet can be dull.

As I drove to work the pundits on the radio were interviewing someone or other from the Foreign Office. This person is supporting Jeremy Hunt in the race for the leadership of the Conservative Party for the simple reason that Boris Johnson is being seen more and more as something of an embarrassment. The claim was made that when the BBC were filming him he referred to the French as "turds" and his aides had to beg the BBC not to broadcast this (and several other gaffes).
Is this true? I don't know. Possibly. But if this is being alleged about a potential future Prime Minister it makes you worry for the future. This was the theme that some bishop took up for his "Thought for the Day" platitude.  The bishop took the line that because it is a crappy old world, let's beg God to sort it out for us. Personally I would take the line that it is a crappy old world because God *hasn't* sorted it out and clearly has no intentions of doing so (if God is even there!).
Mind you the writer Pliny the Elder despaired for the future, and that was two thousand years ago and we are still here.

I stopped off at Aldi before work to get some supplies. I got there a few minutes before they opened, and as always there was some weird bloke trying to meet and greet everyone. Perhaps he is just lonely; perhaps he’s just odd… he certainly is no advert for the place.
I got my supplies. I got biscuits and granola. I got a nostril hair trimmer. And I got coconut flavoured bogroll. I’m not quite sure whatever possessed anyone to make coconut flavoured bogroll, but having seen the stuff, I certainly wanted some.

Work was work. Being a hot day a lot of people were sitting about in the hospital gardens. We spent a lot of time today peering out the window watching the antics of one rather delightful family. There were about a dozen of them; they were there for about four hours. The children were drinking coca-cola by the two-litre bottles; the mothers (in open-toed fluffy slippers) were blowing cigarette smoke into the faces of the babies.
What charming people…

As I left work I had a message to assure me that a geocache I’d hidden had gone missing. So I went to have a look only to find it was where I’d hidden it. It was at this point that I checked the geo-credentials of the person who’d messaged me.
I should have known better.
Only having ever found three of the things, the chap was clearly not as knowledgeable about the things as he would like to think he is.

It was at this point that my phone beeped. "er indoors TM" and Cheryl were taking the dogs to the river at Great Chart. Should they wait for me? I said I’d meet them there. We had quite a good half-hour watching the dogs playing in the water.

Not a bad day really…

Posted by Manky Badger at 10:31 pm No comments: