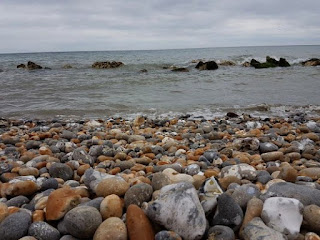 I knew I would regret yesterday’s kayaking, and doing all that heavy lifting yesterday evening was probably something of a mistake too. The night was rather uncomfortable, and I woke in not inconsiderable pain. As well as the elbow that I knew would be playing up, my left knee was troublesome too. There isn’t really any comfortable way to sit in the back of a kayak.

I got up shortly before 7am and had a look at the Internet. I had been sent a little video from Facebook about how me and "My Boy TM" have been friends on there for nine years. I edited the video a little, then posted it up. Not much else had happened on Facebook. Not a lot does these days. I’ve noticed that when I post up a picture (which I do most days) I now get a little message thanking me and saying how many consecutive days I’ve been posting for. This message also tells me how many likes and reactions my previous posting got. Part of me wonders if this is because fewer and fewer people are putting stuff onto Facebook. With over five hundred friends on my list I’d expect to see a lot more activity than I do.

After a while I got bored staring at a screen on which nothing was happening. Despite the dodgy elbow I went into the garden and started sawing up the lengths of decking I salvaged last week. Cut into half-metre lengths I can make some decorative planter boxes for the garden. I did wonder if 8am on a Sunday morning was a tad early to be making noise in the garden, but then I positioned myself where only not-so-nice-next-door would be bothered. And (in all honesty) the day their piano falls silent is the day I’ll listen to any complaints they might have about noise.
Half-way through sawing my phone beeped. "My Boy TM" was up and about, so I drove the old sleepers round to him. I came home to find that "er indoors TM" had emerged from her pit.
I got one more length of decking sawed before my elbow finally gave up.

We took the dogs round the park in the opposite way to our usual route. On the way we met OrangeHead in the co-op field. Fudge went into the river when expressly told not to, and Treacle was generally difficult. With dogs walked we settled them and set off to Samphire Hoe. The weather forecast had been for a *very* hot day so a long walk was out. Instead we went to the beach with Jose and Maria. Whilst everyone else spuddled I had a little kip, and then we had a light lunch at the café. If ever there was an inefficient business it is the café at Samphire Hoe. They probably could have gone slower if they tried, but it would have taken some effort.

We had originally planned to go on to the geo-meet at Ramsgate after the beach, but time was pressing. We went to Tesco where I got new slippers. The puppy had chewed one of the old ones, and the other had vanished (probably down the puppy’s throat). From Tesco it was a short hop to the Windmill for a crafty pint. Anne and Chip have good beer on there now, but the volume of the music puts me off. Sunday afternoon was a safe time to visit.
Once home I carried on sawing decking. It took some sawing, but eventually I got all of it chopped up ready for making planters.

I then had a look at Facebook on my phone. This morning I was whinging that no one posts on there any more. This afternoon… The new Doctor Who had been announced whilst I was sawing, and so many people couldn’t wait to share the announcement. In all honesty I knew I wouldn’t be able to avoid finding out who it was for long… In practice there are three people I’m tempted to spend the next few weeks spoiling as much as I can for them. I shan’t though as they would have no idea what they had done to offend.
And then to add insult to injury I was told what happened in last week’s episode of The Crystal Maze. I don’t need to watch that now.

I then spent half an hour writing up more CPD; I shall watch some telly now. It won’t watch itself.