I had three pints of ale last night and woke feeling like death warmed up. Is this how things now are?
Having seen the last episode of “Titans” I had a little look at Netflix to find something to watch. There is a third season of “Uncle” so I started watching that from the start. It was rather good.
I then got myself organised and went to find my car.

I got some petrol and drove down to Folkestone. As I drove the pundits on the radio were discussing the latest scaremongering about corona virus. The most theory is that the whole thing might just be a thinly veiled ruse to boost the fortunes of the pharmaceutical industry. Apparently the mere thought that a certain company has an angle on a vaccine is enough to massively increase the value of the company on the stock exchange. People really are getting rich on the strength of a rumour.
Am I the only one who feels that there is something fundamentally wrong with the way our financial system works?

I got to Folkestone. Seeing it was Leap Day I thought I might get the e-souvenir that you get for finding a geocache today. I couldn’t find the first one I went looking for, but I came up trumps on the second.
I then went on to find Jimbo, and got on with the business of the day. Emma was moving house. She’d got it all packed. All we had to do was load all the furniture and boxes into the cars and vans, drive them half-way across Folkestone, unload, and go back for more.
Simple to type; rather hard work to do. But after six hours we had most of it done.
Having got to the stage where all the luggage had been moved from one place to another I left them all to it. They could do their own unpacking.

I came home, and together with "er indoors TM" we took the dogs round the park. As is so often the case, a walk in the park is far from “a walk in the park”. Pogo tried to pick several fights.
As we walked we met OrangeHead who would seem to have recruited a whole new posse. We also saw one of Cheryl’s mates with whom we went to Turkey last year. We were totally blanked; I think there has been some falling out there.

I played Tetris for a bit, then we settled the dogs and drove down to Hastings for a family party. Brother-in-law has had a fiftieth birthday; nephew is about to have a twenty-first birthday. There was a joint party which passed off rather well. Mind you, in years gone by I would have been in with the younger element at the bar at this sort of thing. Nowadays I’m sat with the uncles and the grandparents. At least when the nieces and nephews took turns to make polite conversation at the old ‘uns they just grinned at me and moved on to a more deserving cause.

Driving home was interesting. We came along the A259 and A2070. These roads have the old-style sodium vapour street lights and consequently they actually light up the streets unlike the lights up my road.
This is something I’ve been banging on about for some time…

My back hurts… can’t imagine why…

Posted by Manky Badger at 11:27 pm No comments: 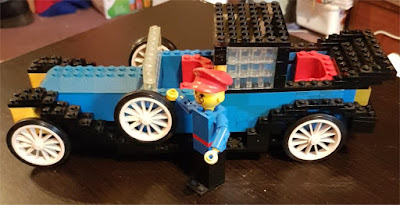 I slept like a log. Over brekkie I had a look at the Internet. I read on Facebook that Geo-HQ are trialling a new idea. It’s only happening in two US states at the moment, but the idea is that anyone who has stuck a film pot under a rock but then hasn’t done any geocaching for five (or more) years gets a message. Are they still keen on the noble and ancient art of sticking film pots under rocks? If so, all is fine. If not, then Geo-HQ will clear the old ones off of the map. Not only does this get shot of the rather manky nasty smelly crappy geocaches (and the ones that have been missing for years) that give the hobby a bad name, it also clears up space for more geocaches.

The weather forecast said there was a ninety-two per cent chance of rain this morning. But seeing that it wasn’t raining I took the dogs up to Kings Wood anyway. There was a minor hiccup in that just as we were arriving a dozen deer ran across the road. I hadn’t noticed until the dogs all kicked off, and by then it was too late to brandish the camera.
We had a good walk. We met other dogs and played nicely (there are no “precious princesses” in Kings Wood). We did get a bit muddy, but that is only to be expected. We walked our usual circuit of the top end, but in reverse and used the Munzess I put out recently to guide our way.
The rain held off until we were only fifty yards from the car.

We came home; I washed the mud off of the dogs. For all that the nation is crapping its collective pants about the negligible concerns of corona virus, Alabama rot is a much more serious and pressing concern to me.
With mud hosed off I had a look at the monthly accounts. Bearing in mind we’ve had a holiday away and an MOT failure, I’m far better off than I thought I might be. Not rolling in money, but I could be a whole lot worse off than I am.

No day off work is complete without a major session of ironing. I ironed for a couple of hours whilst watching “The Bounty” on Netflix. A favourite film of mine; I’m sure Netflix have edited it somewhat as I’m sure there were some scenes missing. Mind you that’ not a bad thing as that film does go on a bit.
I then put my birthday pressie together. "er indoors TM" had bought me the 1976 Lego Renault model which I’ve been after for some time.
You can see a stop-motion video of the construction by clicking here. The video is a tad jerky; I need to work on rigging up the camera somehow.

"er indoors TM" came home; we settled the dogs and went round to the Riverside Inn where we had a rather good catch-up with friends. It was good to catch up, but we could do it cheaper at home where it would be a lot less noisy too…

Posted by Manky Badger at 10:56 pm No comments: 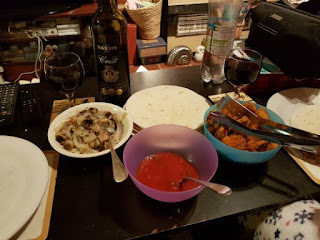 I got up at five o’clock this morning, and as I fussed Fudge I saw that the smart meter was showing that we had already used one pound thirty-one pence worth of electricity and gas. In five hours. How is that possible? The thing barely reacts when I spend an afternoon washing and ironing and mowing the lawn, but goes mental we are all asleep.

I made toast; Fudge had the crusts. As I scoffed the rest I watched this week’s episode of “Inside No 9” (which was rather good) then sparked up my lap-top to see what had happened overnight. I’d not missed much. There was talk of several new series of geocaches being set, there were whinges about the Munzee software.
My email in-box was equally dull. LinkedIn wanted to know if I knew Andrew Jones (MD at A.M.J.Mechanical Contractors). As it happens I don’t. And whilst I’m sure that Mr Jones is a sterling fellow and we would probably get on like a house on fire, I find myself wondering just what is LinkedIn all about. Is it really just some random friend-finder?

I walked through the rain down an incredibly poorly-lit road to find my car, and set off towards Pembury. As I drove the pundits on the radio were scaremongering about the Corona virus and about the floods that are blighting the nation. A lot of people were asking why the Prime Minister wasn’t showing his face in the flooded areas. I had to laugh – it wasn’t that long ago that people were carrying cards saying they didn’t want to be visited by the Prime Minister if they were in hospital (following a terror attack) but now people *do*want to see him.
Perhaps the public might make its mind up?
There was also talk about how the Apple corporation have contacted most of the major film-producers saying they don’t want the villains of films to be seen using an I-phone. Apparently having an on-screen baddie using an I-phone is bad for business. This was laughed at until some media-type person (who was being interviewed) asked when you last saw a baddie in a film or TV show drinking Coca-Cola. Apparently the Coca-Cola corporation put a stop to that some years ago.

I stopped off at Tesco in Pembury where I deployed a Munzee and got some shopping. I now find I’m going to Pembury’s Tesco just to remind myself that my day isn’t that bad when I compare myself to the miserable people who work there. A dozen staff; all with faces like a slapped arse.

I went in to work where the day wasn’t that bad really. We had a couple of Red Alerts, but they weren’t as bad as they might have been.

I came home; "er indoors TM" boiled up a very good bit of dinner which we scoffed whist watching last week’s episode of “Hunted”; I really would like to have a go at that show. And ten we watched “Dogs Behaving (Very) Badly” which (if nothing else) makes me realise that Pogo isn’t *that* bad…

Posted by Manky Badger at 10:45 pm No comments: