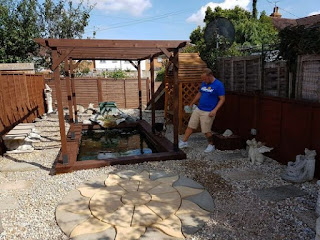 I had a wry smile as I scoffed my toast this morning. A Facebook Friend had written about her most recent place of work: "Tried to forget about this place but up pops an FB 'See Your Memories!" The memory was from a couple of years ago when she supposedly won a workplace lottery. She went on to say "Never did get the money. Just another example of how nasty and untrustworthy some of them are".
I can remember (about ten years ago) being co-opted onto a committee with this person. Where we worked at the time had recently installed a staff suggestion box. Me, her and a couple of others had to consider the merits of all the various staff suggestions. This person dominated the committee; rudely and patronisingly throwing out every single suggestion that was made. What goes around comes around?

As I’d worked yesterday I wasn’t working today. And so "er indoors TM" had taken the day off. We’d planned to go canoeing on the Medway, but the weather forecast wasn’t good for that. So as "er indoors TM" snored I walked the dogs round the park. As we walked Fudge straggled more and more until we saw our Irish friend and Fudge was like a bullet form a gun sprinting to try to hump his dog.
I wish he wouldn’t do that.

We came home to find that "er indoors TM" had emerged from her pit. Both dogs scoffed their brekkie. Treacle always does; "Furry Face TM" is far more picky, but going for a walk before brekkie dies give him an appetite. I hung out the washing and gathered the turds strewn around the garden. How can two small dogs create so much dung?
I’ve had some stick about the fact that we really do clear up the dog turds in our garden. Several people have said they just leave their dogs’ turds where they fall. Eeeww !!!!

We drove round to collect "My Boy TM"; with canoeing on hold we thought we’d go have a look in Whelans and the first fruit of my loin fancied coming for the ride. Having made the garden pond look good, the decking area in front of it looked rather tired. I had an idea to replace it with some paving slabs. Whelan’s is the place for that sort of thing.
We got to Sheerness and saw exactly the sort of thing I had in mind (as well as some random Whelan statues and stuff), we handed over the credit card, and brought the stuff home. "er indoors TM" took the dogs for a little walk whist we unloaded the car, and then we hoiked the decking out of the way.

I had rather hoped that the area under the decking was level. Having level ground was rather fundamental to my plans.
The ground was far from level.
I drove "My Boy TM" home whilst I pondered this setback. I needed a level surface… so I lifted the weed-proof membranes, dug the ground over, laid down some flat wood (the sort of thing you put in the back of a wardrobe) and put the slabs in place.
They looked bloody awful.

The problem was the flat wood. If it had been a lump two metres in each direction it might have worked. But having had to cobble It together out of smaller lumps didn’t work. They didn’t lay flat; they were all over the place. So I lifted the slabs, lifted the weed-proof membranes, and dug it all over again. It was at this point that he cavalry arrived; "My Boy TM" had come to see what I had been whinging about. We got the membranes back down, and laid the slabs. With soft ground and no silly bits of wood underneath, the slabs went into position far better. They were a little uneven, but we walked about on them to sort them out, and they will settle. Once they’ve settled I’ll sort any final irregularities.

Because the slabs covered a smaller area than the decking we needed more shingle, so we went to B&Q. They were selling the shingle we wanted with a discount if you bought ten bags or more. We needed six bags, but six bags cost nineteen quid. For twenty-two quid we could have ten bags.
We got ten bags, and having used the six we needed we have four in reserve (just in case). I anyone has the kind of emergency that needs four bags of shingle, I’m your man.

"My Boy TM" set off home, and I started carefully disassembling the decking, Rather than ripping it apart I really was careful. Some of it will go to the tip tomorrow, but I plan to build some little planters out of some of the left-over decking,

I then got a text message - "er indoors TM" was outside. I probably wasn’t dressed to go to PC World, but I squirted some deodorant in the general direction of my armpits and off we went. The nice man was very helpful, and following quite a bit of advice from people on Facebook I went for a HDMI upscaling DVD player which will automatically turn my DVDs into HD. Not that I can actually see any difference between HD and normal telly.

"er indoors TM" boiled up a rather good bit of dinner and then went bowling. I’m going to watch the end of the film I tried to watch on Saturday evening.
I’ve had a rather good day off today, but I’m still feeling rather miffed. It didn’t rain and I had been looking forward to canoeing…