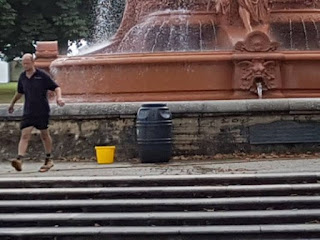 I knew my elbow would be hurting this morning and I rather thought my foot would be tender too after yesterday’s exertions. I wasn’t expecting the pain in my ribs. I wonder what caused that.

Over brekkie I watched this week’s repeated episode of “Detectorists” then had a look at Facebook as I do every morning. The piccies and video I posted up yesterday had got some favourable comments. I wish more people would post up piccies of what they are doing; I’m nosey like that. It also looks as though canoeing is on for the weekend (weather permitting). If any of my loyal readers fancy sailing the seven seas you’ve got a couple of days to get a canoe and then you can join in. Argos do them rather cheaply.
There was a lot of talk about Ed Sheeran. Apparently he was in this week’s episode of “Game of Thrones”, and would seem to be despised by those people on my Facebook list. I don’t know who or what he is. Wikipedia says he’s a singer, and he appeared on the show to surprise one of the other actors.
I must admit I don’t buy into the whole “celebrity” thing. They are just actors in a TV show to me. The sooner people treat actors as any other profession and stop idolising them, the better.
There was also mention about a “poncey” wine web site. I think a friend of mine gets a bung every time he introduces a new customer. Well, he ain’t introducing me. Expensive wine depends on playing on people's pretensions. I've been to wine tastings and to me the cheap stuff tastes every bit as good (and/or bad) as the expensive stuff.

With no emails of note I set off to work. Bearing in mind Tuesday’s debacle I set off a tad earlier than I might have done.
As I drove to work the pundits on the radio were discussing the ongoing Brexit negotiations. They've been doing this all week. One thing which is becoming painfully evident is that there never was any plan for what the UK would do having decided to leave the EU. Listening to what is being said on the radio it is becoming clear that both the EU and the British negotiators are making it up as they go along. I hope it doesn't end in chaos; I suspect it will.
There was also talk of increases to the age at which one gets a state pension. I'm incredibly pissed off about the whole pension thing. Having been promised retirement on full pension at age fifty-seven, retirement for me won't be until I'm sixty-seven at the earliest. Whilst I understand the country can't afford the pension bill, that is hardly my fault. Shortcomings in the system should have been addressed decades ago. The current debacle is akin to finding yourself half way through eating a bag of crisps only to have the shopkeeper chasing you to tell you he's just increased the price of what you bought (in good faith) half an hour ago.

I'd left home early; I was right to have done so. The A2 being closed had caused the M20 to be very slow-moving. It took me an hour to get to work. I got there, and did my bit. As I worked I looked out of the window at the torrential rain and was so glad I'd been off yesterday and not today.  Also as I worked my stomach rumbled. Last night's curry didn't sit at all well today.

With work done I came home and walked the dogs round the park. The annual “Create” festival is on in the park this weekend, and already much of the park was fenced off. I was intrigued by the actions of one of the members of staff there; he was filling huge water butts with water from the fountain. Bearing in mind the chemicals that the council put in that water, and the fact that the local children swim in it, I was intrigued as to what he might safely be doing with that water.

"er indoors TM" will be home soon. There was talk of fish and chips. The grease might settle my rumbling innards…