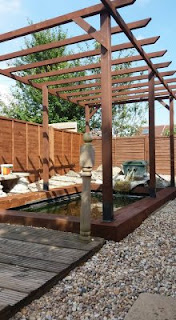 Despite the hot night I was sleeping quite well until the puppy kicked me in the goolies at 5.25am. I thought that was rather mean of her. I didn’t get back to sleep after that.
Over brekkie I saw some photos on Facebook and realised that this weekend was Brighton Kite Festival. For several years kite flying was a major part of my world, but like most hobbies it gave way for other crazes. But I kept going to the kite festivals. I stopped going last year; it didn’t seem right bearing in mind I hadn’t flown a kite for some years, and the weekend was (realistically) a cheap camping trip.

I spent a few moments writing up CPD (for those who like seeing what I learn about professionally click here), then I moved my car to where I *could* leave it all day. I then set up the ladder and the pressure-washer and waited for the first fruit of my loin to arrive.
My phone beeped; he was delayed. So I disassembled the pond’s splash pool and pressure-washed it to save a little time.

"My Boy TM" and Lacey soon arrived, and we got busy putting the pergola together. Now bearing in mind we’d got most of the heavy groundwork done yesterday I *really* didn’t think what was left would take very long. In fact I turned down several offers of help as I only thought we had a couple of hours of work (at most).
How wrong I was…

We got the last sleeper into place; that took forty minutes. Then we had a little hiatus. A friend was taking Lacey out for the day, and had arranged to collect her from outside our house at 10am. So we stopped work and stood outside the house and waited. And waited. Eventually we found out that this person was one who has no concept of time; to her 10am means “in the morning”.
We stopped waiting and went back to work; we got an irate phone call asking where we were at 10.45am.

With Lacey dispatched we got the uprights into place. The post supports were a worry; they had these bolts which prevented wood going into them. We took the bolts out; the wood went in. It was quite a snug fit. But with the wood in place the bolts wouldn’t go back. We wasted fifteen minutes before realising we didn’t actually need the bolts.
With all six uprights in place we built a frame at head height around the uprights. Just as we got the last part of the frame in place so the electric screwdriver went flat.
By now it was mid-day so we put the screwdriver on to charge, and drove over to the American Diner for a spot of lunch. I like the American Diner; I’ve heard some people think it is tacky. Personally I love it; built in an original American railway carriage the place oozes character. We had rather good chicken burgers and fries too.

With dinner scoffed we came home (making Matt Sullivan jump as we drove) and Dan sawed planks to shape as I buried electrical cables. The plan was that once all the sawing was done the electric screwdriver would be ready to go.
It was.
We then screwed nine planks and four cross-members to the frame we’d built. Two seconds to say; two hours to do. By the time we’d put on the final diagonals, been round with the paintbrush and tidied up it was nearly 5.30pm. I honestly thought we would have been done by mid-day, and I had got plans for another garden project for the afternoon.

"My Boy TM" went off homewards; he’d worked wonders today. I had a shower, then told the world what we had been doing. You can see photos of the construction of the pergola (from raw ingredients to finished product) by clicking here.

With "er indoors TM" off out with her mates today, I’d been left to forage for my food. We’d been out for lunch; for tea I had leftover chips. There are those who would turn their noses up at leftover chips – those who don’t mind cooking. Today’s tea was leftover chips or toast, and I’d had toast for brekkie.
As I scoffed tea I put a DVD on. After half an hour it stopped. I think the DVD player has died. Time to get a new one?