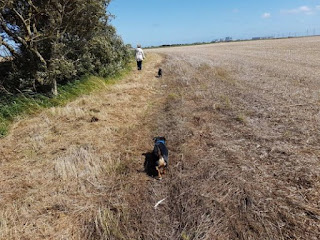 There’s no denying that I wasn’t feeling the full one hundred per cent this morning. Perhaps it was in some way connected with my having done each of the ale pumps three times over last night. Mind you I did have a better than usual sleep; having house guests overnight gave the puppy someone else to bother in the small hours.

Over coffee we played the “Baby Shark” (doo doo doo doo doo doo) video ad nauseum until it was time for brekkie. Knowing that there would be a few of us who would be up for a Full English I’d checked with Brookfield Café on Friday. They were under new management, and they assured me they opened at 8.30am on Sundays. I was just a tad pissed off to get there at 10am to find the place closed and the shutters down. But the town centre was only a few minutes away.
In Vicarage Lane car park we were harangued by a local tramp. This local tramp is famous on the local Facebook pages as she is often seen stealing bicycles. She gave me a sob story; I explained that everyone in the town knows she is a thief, and I suggested she might try another town where she isn’t known. (I’m mean like that). She muttered something about “bloody Facebook” and started begging from another passer-by.

We had planned to go to the Gorge for brekkie; we found ourselves in Café Express. A happy accident. They had set breakfasts, or you could have an “eat all you can of what you can” so being greedy most of us went for that. Perhaps that was a mistake; “all I can eat” is effectively one plate of the stuff, and the set breakfast came with a cup of coffee whereas on the “all you can eat” the coffee was extra.
As I shovelled fry-up into my face I had words to say about chips. Chips with breakfast? No! There are a lot of things you can have with brekkie, but chips? And bubble and squeak – should it have curry powder in it? And tomatoes – tinned (no!) or fried (yes!). And what sort of weirdoes do or don’t eat black pudding?
It was good to bandy insults with Terry and Irene and Mark and Sam and Jimbo; we don’t see them anywhere near as often as we might.

We said our goodbyes, then went round to the Windmill to collect my car. A cup of coffee, then we took the dogs for a walk on the Romney Marsh. We set off for a few geocaches as they marked out a route (if nothing else). Our first target would seem to have been long gone; we got to within ten yards of our second target before discovering we were on the wrong side of a drainage ditch. But we eventually found some Tupperware for which I was pleased, even if I did rick my back at one point.
There was a minor episode when the puppy was obviously chewing something. After a minor tussle we extracted a small dead rodent from her mouth. "er indoors TM" was of the opinion that it was a shrew; it might have been. I don’t know. I wasn’t keen on getting too involved, so we threw the corpse of whatever it was into one of the thickets. There was then another altercation as the puppy tried to go retrieve it. Disgusting creature !! (both the puppy and the dead rodent).
I took a few photos as we walked. You can see them here.

Once home "er indoors TM" set about hand-washing the duvet the puppy had tiddled on yesterday whilst I mowed the lawn. There was a minor hiccup when the handle of the lawn mower broke. I’ve not so much fixed it as bodged it back together again. And with the lawn given a serious hacking I then trimmed back the jungle coming over the fence from not-so-nice-next-door. I would have words with her about it if we were on speaking terms.

"er indoors TM" boiled up a very good but of dinner, and I then ironed shirts and trousers whilst watching last week’s “Dark Matter”.
“Poldark” is on in a moment. I hope I can stay awake; I’ve had a rather busy weekend…