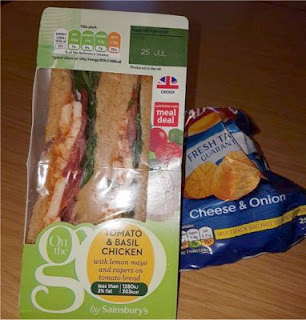 I slept well, I didn’t wake until nearly 6am which was something of a result. Over brekkie I watched an old episode of ”Dad’s Army” then sparked up my lap-top to have my usual morning rummage in cyber-space. With nothing going on in there I set off to work.

I went to get petrol; having filled the tank I joined the queue at the till. We waited. And waited. Rather than taking money the person on duty at the petrol station was sweeping an already clean floor. After a few minutes one of the chaps queuing with me asked how long she’d be. She looked up and did a double-take. Did she *really* have no idea how many people were waiting?

I got to work and did my bit. Yesterday I mentioned how happy I was at work; today I was rather surprised to hear that a chap who started only a few weeks before me was actively seeking work elsewhere. He isn’t at all impressed with the early starts and late finishes. It is a discussion I have had so many times over the years. Having a shift pattern which effectively covers every hour of every day is an integral part of working in a hospital. Surely people realise this when they first consider applying to work in one, and if that doesn’t occur to them, then don’t they pay attention when the working pattern is described at interview?

At lunchtime we had something of a treat… or so we’d hoped. A rep was coming to tell us the latest developments in the world of von Willebrand’s disease. The chap turned up, put up a PowerPoint presentation that someone else had made, and read the slides to us in a dull monotone. I slept through most of it. I’m told I didn’t actually snore.
Although we got free dinner, it was forty-five minutes of my life that I would like back.

As I came home my phone beeped with a Facebook notification. A chap with whom I’d once worked had died. I was rather amazed to read the glowing obituaries that some of his other colleagues had left for him. No one liked him, and now people who wouldn’t have pissed on him if he was on fire are now crying for the loss of their best friend in the world.
I realise it is bad form to speak ill of the dead, but is it really? Why paint the chap to be some sort of wonder-saint? He was a scout leader at the same time that I was. Scout leaders make a promise to keep the Scout Law. The very first part of it says “a scout is to be trusted”. I don’t think this chap said a true word ever. I certainly lost count of the amount of lies he fed us at work; I wouldn’t trust him to tell the time.