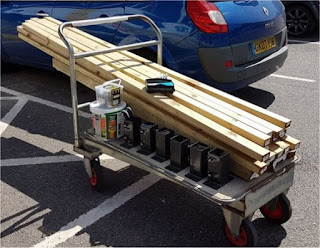 The puppy was particularly restless last night. But if she’s not allowed on the bed she just screams, and that’s not fair on anyone within a hundred yards at 3am. I got *some* sleep so the night wasn’t all bad.

After a bit of brekkie I got the leads onto the dogs (which is easier said than done), and we went round the park for a walk. Today’s walk was much like yesterday’s; uneventful. Which was probably for the best.

I popped up the road to Otford Builder’s Merchants. Their predecessor company was helpful when I was getting shingle ten years ago, so I thought I might get the ingredients for my pergola from them. They could sell me the timber, but nothing with which to stick the timber together. Against my better judgement I went to B&Q who (this time) were *really* helpful. I came out with six fence posts and sixteen planks and an assortment of screws, spanners and bolts and a receipt for just over two hundred pounds.

Getting the stuff into the car took some effort; getting it from the car to the back garden took *serious* effort. And with the stuff home I painted all twenty-two wood bits. It only took three hours. Seeing how the sleepers which will form the base of the pergola are a bit loose I went round to Screwfix Direct to get the fixing bracket that B&Q didn’t have. Screwfix Direct didn’t have it either, but Ashford Fixings did. Having got to the point where I *thought* I had all the makings of a pergola I got myself an ice cream from over the road (not a bad lunch) and devoured it whilst watching an episode of “Dad’s Army”.

By the time I’d given all the pergola timber a second coat of paint "er indoors TM" had come home. We had a quick dinner then it was round to Chris’s. Chris had got some free samples of Innocent coconut water. I’m sure there are some people who like the stuff; I shan’t be paying out for any.
And then we watched Jeffrey Combs in “Gotham”. He’s put on weight…