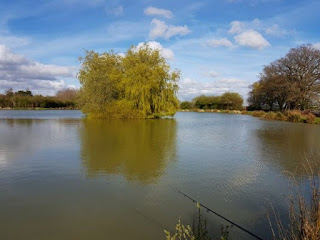 Having spent much of the night listening to the rain I was rather surprised to get up to find it hadn’t rained at all overnight. I must have been dreaming. But what a vivid dream it had been. I set off to the co-op to meet "My Boy TM", and to get lunch. We then went on to Rocky’s café for a full English then on to Shirkoak for another day’s fishing.

The weather had been forecast as overcast in the morning and sunny in the afternoon. It rained in the morning, but the afternoon was rather bright. Fishing-wise the day started quiet, and stayed quiet. We’ve had some really good days at Shirkoak in the past. Today was (in all honesty) probably an average day’s fishing for most lakes, but compared to what we’ve had before we were rather disappointed. Mind you we both lost count of the fish we’d had, and we both had carp up to five pounds. Not massive as carp go, but on light tackle certainly put up an impressive fight.

We came home about an hour earlier than we might have done; "My Boy TM" was expecting a delivery of shopping. Usually on the last Friday of the month I would be off to the astro club. For some time the last Friday of each month has been a firm booking for me with the astro club. But over the last year the thing has (for me) rather lost its appeal. Over the years I’ve made great efforts to build up a sense of friendship and bonhomie amongst the regular attendees. I’ve arranged all sorts of events and activities for the regular attendees of the club, and included people I’ve met there in all sorts of family events.
I’ve had it all thrown back in my face by what I thought was one of the best of friends.
Things have been far from peachy behind the scenes at the astro club for a very long time. Having spent the best part of a year or so trying to work out what has gone wrong I think the problem is that I have dared to voice an opinion different to that which is being touted as incontrovertible fact. When I say “I believe differently for the following reasons” I am being seen to be deliberately giving offence. The many conciliation attempts on my part have just made bad feelings worse.
There is little point in rehashing the specifics of trivial squabbles which would mean little to anyone, but over the last year or so I’ve been told that I was actively excluded from the formulation of plans for the observatory project (that I suggested in the first place) because I was an embarrassment. Furthermore (apparently) I am “subversive, manipulative and a leader of negativity”. I have variously been told (quite nastily) that I don’t "live in the real world", that my opinion is one of a "no brainer" and that conversations with me are akin to banging your head against a brick wall. And then it became really personal when despite having spent years working all sorts of odd hours at nights, weekends and public holidays (including family birthdays and Christmases) I was told about just how little time I put into my professional life.
Finally, having been told of the things being said about me to friends and family I have decided that I have had enough I am distancing myself from all of this. If it means I have to leave the club to get away from it, then so be it. The astro club has stopped being fun for me. And from here on in if it’s not fun then I am moving on. 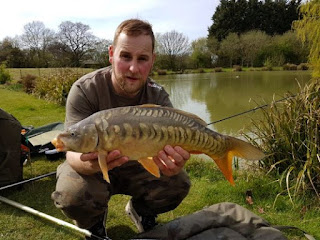 The alarm woke me at 5am this morning. A day’s leave, so I am again up and about at silly o’clock. I scoffed some toast, had a quick look on-line and set off to collect "My Boy TM". I’d loaded up the car last night to save a little time but I was still not as prompt as I’d have liked to have been.

We were at McDonalds shortly before 6am. McBreakfast isn’t as filling as a full English, but there is nowhere else open at 6am where we can get fed. Once brekkied we set off to Biddenden. Rather than going to our usual haunt, we thought we’d fish somewhere else. We’d heard good things about Cackle Hill fishery and it only took half an hour to get there. We parked up shortly before 7am, exchanged pleasantries with the owner, and made our way to the lake.
Oh dear…
It was very pretty. Very scenic. And absolutely overflowing with trees to catch with fishing rods. And it was not that much bigger than some ornamental ponds I’ve seen. But we set up and had a go. After five minutes I was wondering if we’d made the right decision in going to the place. After an hour and a half I’d had six tiddlers. For the non-piscatorial of my readers, six tiddlers in ninety minutes is what we anglers call “crap”. "My Boy TM" jokingly suggested we pack up and go to Shirkoak (where we usually fish). I jokingly said I’d thought about that over an hour previously.
We were in the car and on the road before 9am.

We got to the lake at Shirkoak with something of a sense of coming home. We found somewhere to fish, set up, and had fish within minutes. My second fish was a carp of about four pounds caught whilst I was trying for tiddlers. Within half an hour I’d lost count of how many I’d had.
The fishing did slow down; especially for me. But as my cousin once told me if you aren’t catching fish try something different. So as the day went on we changed baits and tactics with varying success. By the end of the day "My Boy TM" had caught far more than I had. It wasn’t the busiest day we’ve had at Shirkoak, but it was still a good way to spend a sunny day.
I took some photos (as I do), but still life rarely does justice to photos, so we made a little movie too.

We came home just as the sun was starting to go down; I came home to an empty house. "er indoors TM" had taken the dogs to the park with "Daddy’s Little Angel TM" and "Stormageddon - Bringer of Destruction TM" . So having had a rather early start followed by a day in the sunshine I dozen on the sofa until she came home.
A rather good bit of dinner, an episode of “Benidorm” and I think I shall have an early night. I’ve had a busy day, I’ve caught the sun, and I’ve got another early start tomorrow…

Posted by Manky Badger at 10:10 pm No comments: 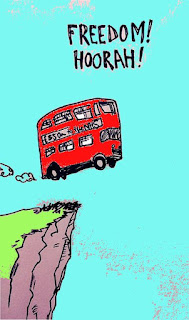 A few people have been posting on Facebook today about how they are sick of hearing about Brexit. I sympathise, but today will be one of those days that goes down in history as the United Kingdom formally starts the process of withdrawing from the European Union. Personally I think this is a bloody stupid thing to do. Regardless of the petty political whims of the day, we are better together in a union than apart and squabbling. Leaving the EU is a total leap into the unknown and I’ve yet to hear any reasoned arguments in favour of leaving. For all that those wanting to leave claim they don’t want to be subjected to ridiculous rules and regulations from Brussels, I’ve yet to hear any specific ones mentioned.
I could be wrong. I hope I am wrong. But in the meantime those immigrant workers who do the jobs that the average Brit is either too lazy to do or is unqualified to do are going home in droves.

Looks like I was worrying about nothing, doesn’t it… However the one about increasing NHS funding by three hundred and fifty million pounds each week turned out to be a total fabrication. Listening to Radio Four every morning has made it quite apparent that the trade deals are *far* from a done deal. What will happen with the Irish border is anyone’s guess. From my own experience the science and research projects are going down the pan.

It is now painfully evident that the likes of Boris Johnson not only said that black was white, they also said that shit was sugar. It is quite clear that those who voted to leave because of what they had been promised were lied to.

I wonder how it will all pan out… A second referendum would be silly and would undermine the whole concept of having a referendum in the first place. Who knows – it might not be an unmitigated disaster. It might actually turn out for the best. But if it doesn’t, perhaps those on the “leave” side who made these wild and unsubstantiated promises might be held to account for them.