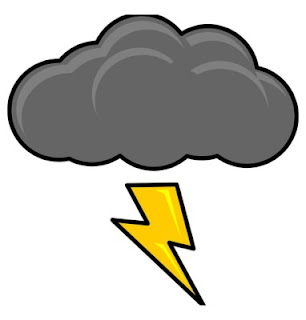 I slept like a log last night, and was finally woken by Pogo chewing my nose at half past eight. Clearly it was time to get up.

I came downstairs to find that er indoors TM” had just chivvied Sid into the garden. He had a little bimble round, came back in and crapped on the lino. I wish he wouldn’t do that. With turds cleared I made brekkie, saw there was nothing kicking off on Facebook (even though yesterday’s pornmonger was still active), and with no emails of note I got Pogo and Treacle onto their leads and went out to do a little geocache maintenance.

We drove to Park Farm, and had a quick walk round the series of geocaches I’d hidden there a while ago. Sure enough, two of them were missing, so I replaced them. As we walked we met two other dogs. One wasn’t on a lead, and all was fine. One was on a lead, and mayhem ensued. I got chatting with the chap whose dog was off the lead; he too found that having dogs on leads usually causes far more problems than it solves.

I realised it was raining when we started walking, but it was only a gentle fine rain. You know the sort of rain – the one that gets you absolutely soaked even though it doesn’t look like anything to worry about.

We came home to an empty house. er indoors TM” had gone off to help Cheryl prepare for a funeral. I cleaned the dogs (they always get grubby), and as the rain got worse so I solved geo-puzzles. Lots of them. As I puzzled I found myself looking out of the window. Blue skies out of one window, black skies out of another. Glorious sunshine, rain heavy enough to drown out the sound of snoring dogs, and back to glorious sunshine all within five minutes.

After a few hours er indoors TM” came home, with a thunderstorm hot on her heels.

I made a start on my next Wherigo project… and that was the day. Fiddling about on the lap-top whilst watching the weather violently swing from one extreme to the other…

I suppose I got a lot of puzzles solved, and I got a lot of Wherigo writing done, but it really did seem like a wasted day… the forecast for tomorrow is much the same.

Posted by Manky Badger at 9:29 pm No comments: 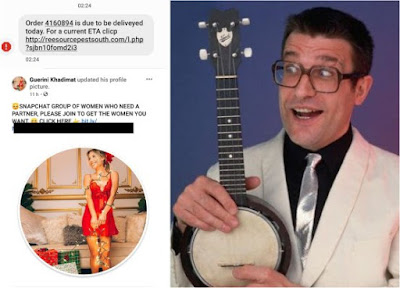 I made toast, and watched the first episode of the new series of “Motherland”, then sparked up my lap-top. Four friends were having birthdays this morning so I sent out messages, then peered into the internet to see what I had missed overnight.

Ivor Biggun has announced a new album which will be released soon. I shall certainly be getting that. And after that revelation, all of the trivia that fills the morning on social media palled into insignificance.

I thought about phoning in sick, but I wasn’t really sick this morning; I was just suffering from a combination of feeling “bleaugh” and not being arsed. I get that some mornings; it usually passes. I got ready for work and set off.

Before driving off I fetched our bin from where the bin men had tossed it. That was one less bin for everyone to slalom round as they made their way up and down the street. Would it cause the bin men physical pain to have a care about what they do with the green bins? You can regularly see young mothers pushing push chairs up the road on Fridays as the pavements are impassable once they've finished.

As I drove to work the pundits on the radio were interviewing  the woman who had found a meteorite on her driveway. Apparently the thing missed the guinea pig cage by inches (for which I suppose the guinea pig was grateful), and she has now donated the bits of it to the Natural History Museum (presumably the bits of the meteorite which broke up on impact, not bits of the guinea pig cage). When asked if she'd  kept any of the bits she said she hadn't, but the Natural History Museum had sent her a photograph of all of the bits, and she was just pleased to have seen something "which was older than the universe".

Those interviewing her weren't openly taking the piss, but some people just don't come over very well on the radio.

I got to work where the day went a tad better than yesterday, even if I did spend much of it farting like a thing possessed.

During the afternoon tea break my phone beeped. I had a friend request on Facebook from Guerini Khadimat who invited me to join Whatsapp sex group 00864. Presumably there are  (at least) eight hundred and sixty-three other Whatsapp sex groups? I squealed her up to the Facebook feds. I bet they do nothing about her porn-mongering. They never do…

I came home and spent most of the evening asleep in front of the telly… Perhaps I should have phoned in sick today.

Posted by Manky Badger at 10:35 pm No comments: 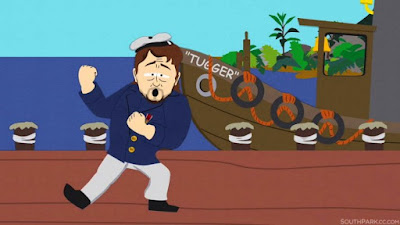 I slept through until six o clock this morning when my phone told me to “get your arse out of its pit”. A good night’s sleep is usually the consequence of a night shift followed by a bottle of red wine.

Over a spot of brekkie I watched another episode of “Hardy Bucks” (which was rather crap) then peered into the Internet to see what I’d missed overnight (as I do most mornings).  I had a friend request on Facebook from one incredibly dodgy looking young lady who was “looking for friends to be her slaves”. I deleted her friend request and squealed her up to the Facebook feds. If I don’t take a moral stance, who will?

I saw that an old schoolfriend of mine has just moved back to Hastings (from somewhere in Surrey). He’s apparently retired to his old home town. Retired!! He’s only a month older than me.

And there was an amazing row kicking off on one of the political groups I follow. Some amazingly jingoistic chap whose business has been decimated following some regulation change or other due to Brexit has had to lay off over half his workforce. The chap  chose who he made redundant by giving the elbow to those who he thought voted “remain” in the Brexit referendum. Can he do this legally? Of course not. Can it actually do it? He already has.

I turned off the lap-top and got ready for work.

As I headed to work the pundits on the radio were talking about how there are plans afoot to change how foreign languages are taught in schools as (apparently) it is incredibly difficult for the teachers to predict how well students will do in their exams. From my experiences with the teaching of languages there is certainly a need for change. Neither of the fruits of my loin left school with the ability to speak any foreign language (and their English can be iffy at times!).

Years before that, the way I was taught French frankly didn't work. At primary school Miss Kavanagh would stand at the front of the class and make all sorts of strange noises, and would then look at us in a quizzical sort of way. We would then make strange noises back at her (in imitation of the noises she'd made). Sometimes she was pleased with us, sometimes she wasn't. None of us in the class ever had the faintest idea of the meaning of any the noises she had made, or what her reaction might be to whatever odd noises we had made in return.

At secondary school we learned to read and write in French with a fair degree of success, but actually speaking the language wasn't encouraged.

I can remember a conversion on the subject I had many years ago with one of my old French teachers (who by the time had become a good friend).  My old teacher and friend told me that we were taught to pass an exam, *not* to actually be able to speak in French. A rather damning admission, but an honest one. (Mervyn was nothing if not honest).

I got to work, picked up a new box of COVID tests, and did my thing. As I worked I struggled to shift the earworm I had somehow acquired, but to no avail. The Russell Crow "Fighting Round The World" song from South Park was firmly stuck in my head.

Work was rather busy, but not as busy as home had been. er indoors TM” had hired a carpet-washing gizmo and was having a good scrub at the carpets today. I am reliably informed that even after six scrubs the water was still coming out black.

The living room is still in uproar as we don’t want to put rugs and furniture back onto a damp carpet. Maybe we’ll do it tomorrow. Or maybe I might have a rest tomorrow – I’ve felt really rough all day. If I don’t improve overnight I’m thinking of calling a sickie.

Posted by Manky Badger at 9:22 pm No comments: