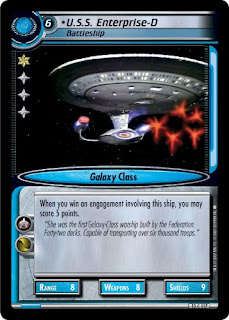 Many years ago (twenty-three to be precise) together with a dozen or so of my closer associates I collected playing cards of the Star Trek Customisable Card Game (or “Sad Cards” as we called it). You bought the cards in a sealed pack of a dozen. Being sealed you had no idea what cards you were getting, and with over three hundred cards in total you had to buy a *lot* of packs to get the lot. Getting a complete collection was further complicated by some cards being far rarer than others. Like everybody else I would buy in bulk in a desperate attempt to complete my collection.
I did complete the set; I still have it on a shelf somewhere. At the time it was common knowledge that a full set was worth over seven hundred pounds. No one wanted to buy a full set; you really couldn’t give them away. I offered my full set for a fiver and had no takers, but it was common knowledge that a full set was worth over seven hundred pounds.
Overnight Martin messaged me to say that for some odd reason these cards are becoming collectable again. Perhaps I might dig them out and dust them off.

Over brekkie I watched an episode of “Detectorists”, and with no emails of note and absolutely nothing happening on Facebook, I got dressed. I put on one of the new shirts I bought yesterday. I'd thought I'd got a bargain. I hadn't. I'd actually got a load of old rubbish. The body of the shirt may well have been size XXL; the arms were small (at most). I put the shirt on and simply couldn't move my arms. There must have been some cock-up at the factory. I shall take it back when I'm next on a late shift.

As I drove to work the pundits on the radio were talking about a school in Derby. Recently its educational standards have gone through the roof. The headmaster has insisted that during lessons the children close their mouths and listen to the teacher. During lesson times the school is a quiet place; not noisy like it used to be. And they have instigated a somewhat radical policy in which children wandering the school during lesson times are challenged as to why they aren't in class.
Amazing what a difference a little common sense has made.
There was also talk about the Government's Repeal Bill in which all laws made by the European Parliament are to be absorbed into British law. I thought the whole (stupid) idea was to get rid of the laws imposed by the European Parliament, not to just change the heading on the paper on which they are written.
This whole Brexit thing isn't turning out quite how it was promised, is it?

I got to work and as I worked I got a text. A minor disaster... "My Boy TM" isn't available for next week's fishing trip. That's a shame... Do I go on my own (lonely) or see if anyone fancies a geo-walk. I've half a mind to go set some geocaches in the Chilmington area. I shall have a look at the map later.
On the other hand I really need to disassemble the biggest water-feature in the garden and give it a good clean-out. The paving slabs laid last Monday should be settling by then, and maybe I could make something from the decking I saved.
I *could* do the garden, but I still ache (and hurt) from Monday's garden work.