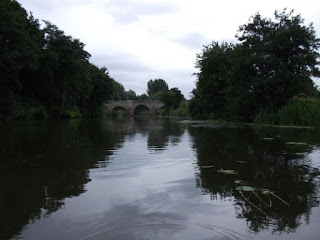 Over brekkie I watched an episode of “Time Gentlemen Please”; now that I have a working DVD player I might as well use the thing. I quite like “Time Gentlemen Please”, originally broadcast seventeen years ago (can you believe it!) it is something of a classic.
I then had a look at the Internet – not much had changed overnight.
I sorted out all the gear I would need for later, and set off to work.

As I drove to work the pundits on the radio were discussing a speech that ex-Prime Minister Tony Blair had recently made. The gist of discussion was that the general public aren't overly happy with the way that Brexit is going. The promised (weekly) three hundred and fifty million quid for the NHS hasn't appeared, and nether have the new trade deals promised the day after the referendum, to say nothing of Turkey not joining the EU as was threatened, nor of all the European laws (which were to be thrown out) being assimilated into UK law nor have all the European workers been sent home on the next banana boat. It seems that what has been delivered isn't what had been promised. All the chap being interviewed could offer was a rather nasty personal attack on Tony Blair.
Talk of a second referendum is becoming more and more fashionable in some political circles. Do we need a second referendum? When you consider that nothing which was promised is looking at all likely to be delivered, and pretty much all that was promised was lies and fabrications, perhaps we should go back to square one and think again with some realistic proposals?

As I drove past McDonalds I thought about having McBreakfast. But instead I drove to the works' Costa where I had cold coffee and the most odd-tasting Bakewell tart. I wish I had gone for a Happy Donald.

I did my bit at work, and came home in the opposite direction to the one I usually take. I’d arranged to meet "er indoors TM" at Teston Bridge Country Park. I got there a few minutes before she did and I bought car park tickets. We then set up her kayak and carried it down to the river. As we walked we went through the field in which we’ve camped so many times, and I had something of a revelation. Teston kite festival is often run *against* the locals rather than *for* the locals. As we walked through the field people were playing games, having barbecues and picnics, generally enjoying themselves. The field was full. Looking back, our camping and kite festivals have been in their way.

We got to the river; we got into the canoe (which is easier said than done) and set sail. We paddled from Teston lock downstream as far as Kettle Bridge, and paddled back again. A round trip of about three miles. On our way we hunted for seven geocaches; we found five. Hunting Tupperware in a kayak isn’t easy.
As we paddled a voice called out to us. It was a chap with whom I work who was out for a jog.
The last time we kayaked we lost the skeg half way. This time the skeg remained attached; even if it8 did get a bit weedy. I was amazed at the difference having a skeg made.
And I even took a few photos as we sailed.

Once home we took the dogs round the park for a walk. As we walked a bike screeched to a halt next to us. It was "My Boy TM" on his way home. He said he hadn’t recognised us, but had recognised the dogs.
There is one hedge in which Fudge usually has a very good rummage. As he was scrubbling in it today a huge rat shot out. In his day he would have caught that rat.

We came back home, and I spent a few minutes messing in the garden; watering plants, pruning jungles, adjusting paving slabs until my elbow hurt too much to continue. I was just about to forage for some dinner (being home alone again) when "Daddy’s Little Angel TM" phoned.
She was confused...

Oh – and my passport’s arrived.