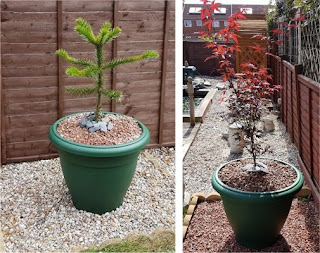 I would have slept better had the puppy not spent the night pushing me about. I should have done something about her, but I’m too soft with my dogs.
Over brekkie I had a look at Facebook; not much had happened overnight other than more spoilers and nasty reviews about Saturday’s Doctor Who episode being put up. It was as well that we watched the show last night. I actually quite liked it.
Doctor Who (like Star Trek) has a cult following of people who’ve watched the show from the start (or since they were born; whichever is the longest) and consequently feel that they personally own the show, and that the BBC are vastly overstepping the line by creating episodes of the show which don’t fit with their mental image of how the show should go. Such negativity killed off Star Trek in 2005, and I can see it doing for Doctor Who as well.

I put the lead onto the dogs, and we went for a little walk. As we went up the road we met Lacey with Dan-Dan and Bella. The dogs had something of a woofing fit when they saw Lacey. Lacey went to school; we waved bye-bye and walked round the park. Some days our walks are rather eventful; other days not so. Today was one of the duller days. Other than exchanging pleasantries with OrangeHead in the co-op field, today’s walk was rather mundane.

We came home, and I hung out washing, gathered dog turds, and then got on with the business of the day. I’d booked today as a day’s leave so’s I could continue in the garden. My plan was to re-pot my monkey-puzzle tree. I had visions of this being something of an arduous task; it was all done in half an hour. Flushed with success I re-potted “Spades” (my Acer), and then had a go at tidying the shed. There is no denying that the shed had become somewhat messy. So much so that I couldn’t actually get into the thing; all I could do was lean in and hope.

I started off by emptying all the stuff that was littering the floor. I found four shovels and three rakes. How many shovels and rakes does anyone need? I found a fishing rod I didn’t know I had. I found three fishing rod bags, two bivvies (fishing tents), a decent fishing tackle bag, and half a roach pole. I found my old golf clubs and two sledges. I found the cushions for the garden chairs we couldn’t find yesterday. I found the electric drill I couldn’t find the other week (I now have two drills). I found a dozen three-quarter-empty tins of dried paint.
I found enough rubbish littering the shed floor to fill my car. I did a tip run, and whilst I was out I popped to the curtain shop by the vet’s to get some more curtains for the shed. The current ones were looking rather tatty.
No one told me the curtain shop had closed down years ago. It is a sofa shop now.

I came home and had some dinner. Stuff left over from yesterday’s barby went down very well as I watched yesterday’s episode of “Poldark”. Have you been watching “Poldark” recently? Those Methodists were quite the rebels back then. I was a Methodist in the early 1980s; Methodism was somewhat dull at that time. I wish I’d been a Methodist in the 1790s.
I then looked at the shed again. There was still no end of stuff cluttering up the shelves, but that is (mostly) clutter; not rubbish. It just needs tidying. I decided to do that another day. Instead I heaved some rocks and shingle about the garden until it hurt too much to continue.

I stepped back and had a look at the garden. For all that I’ve been working hard, it looks awful. The lawn is in a right state where Treacle has been tiddling on it. I did a bit of research. My theory was right – Treacle is to blame rather than Fudge because he tiddles a drop at a time all over the place whereas she puts a whole tiddle-worth in one place. Apparently I should go out with a bucket of water and dilute every time she tiddles, and re-seed the dead areas.
I might have a go at that. After all it is a shame to have put in such a lot of effort into the garden only to have it spoiled by a manky lawn. That might be a job for tomorrow.

"er indoors TM" came up with a good bit of dinner, then went bowling. I put “Star Trek: Nemesis” on the DVD player and did the ironing.

So much for a day’s holiday; I’m worn out…