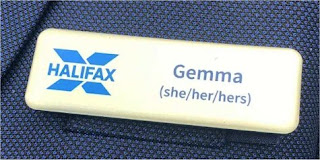 As I peered into Facebook this morning several friends were ranting about the Halifax Building Society’s decision to have personal pronouns on their staff name badges so anyone can tell at a glance which gender any member of staff identifies as.

Some friends were saying what a good thing this was, others weren’t so impressed. I can’t help but feel that if someone born as a male feels they are actually a woman (or vice versa) and wish to identify as such, then that is their right. Speaking for myself as a nearly sixty-year-old five foot eight seventeen stone baldy I identify as a six foot six fourteen stoner with a full head of hair in his mid-twenties… Sadly identifying as such changes nothing. And whatever anyone “identifies as” has no bearing at all on their ability to do their job for the Halifax Building Society. (Does it?)
(You can add preferred pronouns on your LinkedIn profile. Mine are “hatstand/armpit”)
It is claimed that this pronoun on badges policy has cost the Halifax half a million quid what with disgruntled customers taking their money elsewhere.
If I had an account with the Halifax I would be closing it tomorrow… Not out of any trans-hatred but in protest about what a waste of time and money this all is.

There was also a lot of whinging about the (supposedly) dire state of the shops in Ashford’s town centre. People were bemoaning how there is little more than overpriced coffee shops, hairdressers, nail salons and tattoo artists, and they wanted to see more when aimlessly wandering round the place. What more do people want from a town centre? Surely the days of department stores and chain stores are long gone. Pretty much anything I want can be left on my doorstep (note that’s “left on my doorstep” and not “delivered to my doorstep”) by Amazon.

“Going shopping” is a rather expensive pastime, isn’t it?

And I saw I’d missed a geo-meet this morning. Am I being rather paranoid in thinking that had been a rather well-kept secret?

We took the dogs to the woods for a walk. Being the weekend it was rather hard work; he woods were filled with normal people and their dogs, and heaven forbid that the dogs of normal people should ever met another dog (the dogs don’t have an issue, but the normal people do).

And with walk walked we came home where I spent the afternoon asleep.

Being the first day of the Munzee Clan War I shall Munz a little on my way to work… and then I’m doing the night shift… unless I get a better offer in the meantime.

I can’t imagine a better offer coming though… As always a day before a night shift is (sadly) a day wasted.

Posted by Manky Badger at 4:26 pm No comments: 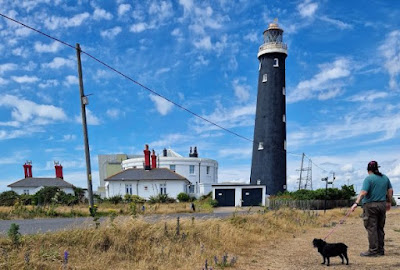 This morning the laptop’s McAfee LiveSafe thingy told me that in the last month it had blocked over two thousand risky connections. Had it? That’s over sixty a day. Bearing in mind since the upgrade last week there is barely a website that the thing doesn’t see as a threat (it *really* don’t like You-Tube!) I wonder if it is being a tad over-sensitive?

I wasted an hour fighting with a geo-puzzle. It is clearly all about the distances from Earth of the stars in the constellation Cassiopeia, but I can’t find any two lists of those distances which agree with each other; let alone give me the thumbs-up from the checker.

We got the leads on to the dogs and took them for a little walk. Rather than sticking to what we know we went to Dungeness and had a little wander around the beach. We had a rather good walk; marred only by the normal people who are clearly terrified at the thought of their dog ever meeting another dog. One of those people saw the puppies and snatched up their precious princess and held it at arm’s length whist our dogs looked on wondering “WTF is going on”.

We took a scenic route home via several Romney Hythe & Dymchurch railway stations (for geo-reasons), and spent the afternoon in the garden drinking eastern European lager whilst the dogs slept.

Not a bad lazy day really… Having done incredibly little today, I feel exhausted.
Posted by Manky Badger at 8:49 pm No comments: 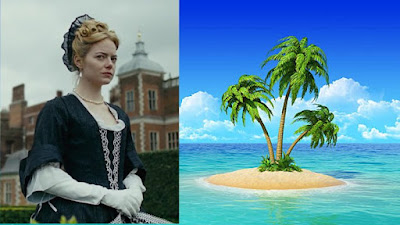 Being on a rostered day off I had something of a lie-in before taking the dogs to the woods. As we drove Bono was on “Desert Island Discs” playing all sorts of music of which I have never heard before, as everyone does when on that show.

But I suspect the list would be different tomorrow.

We got to the woods. I parked as close to the wood as I could and let the dogs loose. Bailey did her usual trick of running into the woods shouting like a thing possessed; it’s a habit I’d like her to stop. Seeing one of the normal people was a few yards ahead and taking our usual route we walked a different way round the wood. We chased a huge squirrel (probably about the size of Bailey), got covered in mud (which was chest deep on Morgan) and there was crying (very loud crying) when Bailey found herself on the other side of a thicket from everyone else and thought she was lost. She was only lost for about ten seconds, but you wouldn’t believe how loud the noise of heartbreak was from such a small dog.

We came home for a bath, then as the dogs snored I spent much of the day ironing all the laundry generated in the last week or so (including all the stuff from the holiday). It took some ironing.

And with it ironed I uploaded last month’s blog entries to the backup storage (eventually). I’d tried last night and not got anywhere. After quite a bit of help from the nice people at 123 (and some farting about) it seemed that my VPN was preventing uploading. Uploading worked when it was turned off and didn’t when it was turned on. The nice man at 123 said he’d never heard of this before

VPN? My VPN came as a freebie when the antivirus was upgraded earlier in the week. And like most IT upgrades it would seem to have been a backwards step. And with the VPN disabled I uploaded my latest CPD project, and wrote up a little more CPD.

“er indoors TM” boiled up fish and chips for dinner and as we scoffed we watched a film. We’d recorded “The Favourite” months ago and it was… I won’t say it was crap. It was actually rather good, if a tad strange, and the film didn’t do itself any favours by just stopping in mid-scene. I’ve looked the ending up on-line; apparently there are several theories as to what that was all about.

And today’s bird is “Dunnock” (that’s posh for “sparrow”). So far all these birds rather sound the same.

Posted by Manky Badger at 9:26 pm No comments: