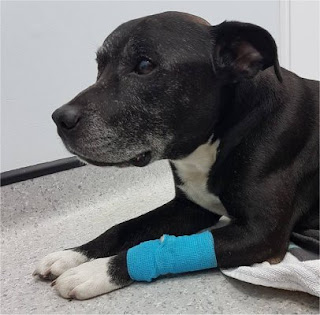 I didn’t sleep well. It was a hot night made hotter by the puppy sleeping on top of me despite my turfing her off every few minutes. I finally gave up trying to sleep shortly after 5am, and over bekkie watched this week’s episode of “Dark Matter”. I think I’m only watching it because I’ve seen it from the beginning and it would be a shame to stop watching now.
As I watched it I sorted my undercrackers out of the laundry. The excitement of my life(!)

I checked my emails. Yesterday tree people had come to Ashford and spent the day doing my Wherigoes. They wrote nice things in their logs; I’m just glad that people enjoyed them. Creating them was a lot of effort, and not that many people seem to want to bother with them, which is a shame.
And I had an email about the geocache in Aylesford. I had got my sums wrong – I shall have another look when I’m next on a late shift.

I set off for work a little earlier than I might have done this morning. Yesterday I whinged that B&Q didn't have cheap electric screwdrivers. Overnight "er indoors TM" found what I wanted on the B&Q website, and it was only a tenner. B&Q's on-line thingy said the local branch had them in stock so I went there this morning, showed them what I wanted from the piccie on my phone, and I walked out with one in less than two minutes.
Such a contrast to what I encountered yesterday. Our local branch of B&Q is  just round the corner from home - it is very convenient, but it can be so variable depending on which member of staff you get. Some of them are absolutely brilliant; others can't find their own arse with both hands (and with the manager shouting instructions through a megaphone).

From B&Q I went to  the cheapo petrol station on the ring road. Usually the place is packed out with people sniffing round the amazingly attractive (?) grandmother behind the till. She wasn't there today. There was an odd-looking rather portly woman instead. Mind you she too had a following all of her own. What is it about the cheapo petrol station that brings admirers to the most unlikely of women?
Mind you, beauty is in the eye of the beholder. I once worked with someone I (probably uncharitably) considered to be the most ugly woman on the planet. Her lower lip was three times the size of her upper lip; no two teeth in her head pointed in the same direction, she had a beard like Captain Birdseye, and she was a rather nasty person too. Men used to have fist fights in pubs for her affections.

I then drove off up the motorway to work. As I drove the radio featured a chap from the National Union of Teachers complaining about under-funding in schools. Perhaps I only hear the bad side of things, but as a profession, school teachers really seem to complain a lot. Admittedly their work is hard, but then again so is mine.
There was also talk on the radio of how the lifespan of the average Brit has been increasing, but seems to have stopped rising. All sorts of reasons were mooted about why we aren't living longer and longer any more.
Perhaps we *aren't* supposed to live forever?

I'd got out of Ashford at 7.30am this morning. I expected to get to work at about 8.15am. I got there shortly after 9am. There was a rather bad queue on the motorway. up to last year I'd been late for work once in thirty-five years. Since January I've been late twice in six months. But what with the motorway madness I wasn’t the only late one.

I did my bit and came home again. We walked the dogs round the park. As we walked Treacle trod in dog poo. Has anyone else’s dog ever done that?
And talking of dogs, my oldest grand-dog Buster went to sleep this afternoon. He’d been ill for some time. Nothing in particular, just getting old. His time had come. I’d never met a staffie before. I’d always been wary of them. He was the most gentle dog you’d ever meet. Always pleased to see me, always playing like a big puppy despite his being a big lump.
I keep blubbing…
Posted by Manky Badger at 8:17 pm