Fudge woke me with his fidgeting shortly before the alarm was due to go off this morning. I went downstairs to find "er indoors TM" had spent the night on the sofa with the puppy. She seems to be a rather delicate little blossom at times (the puppy, not "er indoors TM"). When me and my dog came down and woke them they both went up to bed. I thought the idea of "er indoors TM" spending the night on the sofa was so that the puppy didn’t get the idea of sleeping upstairs, but what do I know?
"Furry Face TM" helped me eat my toast as I watched another episode of "Derek", and then I set off to work. I got to my car and came straight back home again once I realised I had "er indoors TM"'s car keys rather than my own.
Once I'd scraped the ice from the car I set off to work, and again the dashboard thermometer read minus six degrees.

As I drove the pundits on the radio were spewing their usual drivel. Apparently two high street banks aren't up to standard. Personally if I had accounts with RBS or Barclays I'd be moving my money today. I have no idea whether or not those two banks are good or bad, but having heard that the Bank of England has given them the thumbs-down I wouldn't take any chances. I wonder how many of their customers feel the same.
There was also talk about the growing extremism across the world. The chap on the radio said that two fifths of all Germans see all Muslims as a threat. What a sad indictment of our world.

I got to work and we had a rather fraught day. The inspectors were in, and nerves were frayed. They come round every five years or so and it is usual for the inspectors to find many trivial failings. It is a commonly overlooked fact that when I was in charge the inspectors found the fewest failings they’d ever found. But am I bitter?
Once inspected I came home and found the baby asleep in her cage. Fudge woke her with his excitement. I let her out of her cage and spent a couple of minutes being licked by two dogs.

Against my better judgement I took both dogs for a walk. I say “walk”; "Furry Face TM" walked whilst the puppy was stuffed down the front of my jumper. We didn’t go very far at all; the baby was terrified by every passing car.
We came home to find "er indoors TM" was home over an hour earlier than usual. It was as well that she was home; on getting home her puppy immediately tiddled and pooped. She wanted the puppy; she can clear up after her.

Lacey was having tea at her other grandparents house just round the corner this evening. We collected her and took her home. It was an outing for the new puppy if nothing else. Sometimes she isn’t quite such a delicate blossom…

Posted by Manky Badger at 8:29 pm No comments: 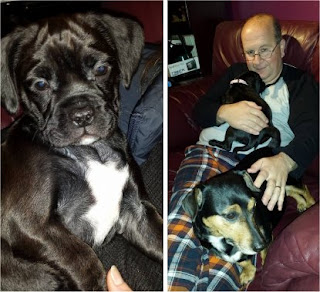 I never wanted a dog. I’ve now got two…
Posted by Manky Badger at 10:03 pm No comments:

I didn’t sleep that well last night, and got up well before the alarm was due to go off. As brekkie cooked I stood on the scales – I’ve lost another five pounds in weight. I’m going to investigate this “fast days” diet but in the meantime hunger is doing the trick. It is a shame that hungry hurts though.
As I scoffed my toast I watched Saturday’s episode of “Thunderbirds are Go”; although it is clearly a children’s program I quite like it. As I watched it my little dog came and sat with me. I quite like that too.

As I drove to work the radio was spouting its usual drivel but I wasn't really listening. I'd got my letter of resignation with me and I was still uncertain as to whether or not to hand it in. As I walked through the door of Morrisons I saw something which made my mind up for me.
I have all sorts of personal reasons for wanting to leave my current employer. Some rather petty and trivial, others not so. But the local newspapers were carrying the story about the review of hospital services in East Kent. The plan is... well, I won't go into details but the bottom line is that (in my opinion) if I don't jump ship I will either be left high and dry, or be transferred to Margate within a couple of years. So bearing in mind the hospital up the road in Maidstone is offering a recruitment incentive and Margate isn't the easiest of places to get to, I gave the boss my letter.
I start my new job eighteen miles up the motorway in eight weeks’ time. I wonder what the future holds. If the past is anything to go by it will be tears and smiles. Admittedly usually more smiles than tears, but time will tell.
It always does.
Posted by Manky Badger at 9:19 pm No comments: