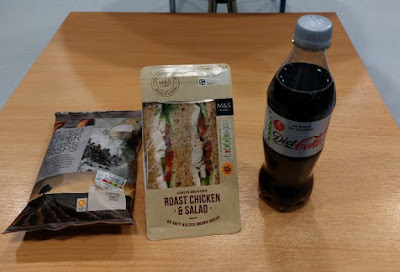 With so many dogs in the house, a full night’s sleep rarely happens. But last night was better than most. Fudge and Sid stayed downstairs and (apart from a minor spat at one o’clock) Pogo and Treacle were far more settled than usual.

I got up when my phone told me to, and made toast which I shared with Fudge. He is becoming quite a worry with his fussy eating. He can be incredibly hungry, but still turns his nose up at stuff he doesn’t like, so finding something he will eat is something of a bonus.

I sparked up my lap-top and peered into the Internet. Pretty much nothing had happened on Facebook, but I had an email from the ombudsman about the ongoing issues with the smart meter. The problem is rather straightforward – the thing can’t be read remotely and since the website was set up to reject the readings I’d given it as being unfeasible, and also seeing how other companies can deliver the same amount of power cheaper, is the meter actually working at all? It strikes me that the whole “ombudsman thing” is doing very little but generating paperwork and making a mountain out of a molehill.

I saw some new geocaches had gone live overnight which were sort of on my way to work, but what with the car still being in the garage I would have to leave those for another time.

Talking of the garage, er indoors TM” drove me over there where my car was waiting for me. The nice men at the garage hadn't found anything wrong with it yesterday and so hadn't charged me. That was decent of them. Even though they'd not found a fault, they'd spent time on it and I was prepared to pay them.

I got into the car, and the dashboard display immediately announced "Parking Brake Fault". I went back in to the garage, and after twenty minutes they put it right. There is a known issue with the parking brakes on my car's model. When you apply the brake you pull the handle and it comes on. When you want to release the brake you just drive away and it releases. If you use the manual release button, then the "Parking Brake Fault" error comes up and has to be re-set by the garage. The nice garage men know that...so why did they use the manual release button?

As I drove up the motorway the pundits on the radio were saying that some impartial review has shown that racism is actually and officially in decline in the UK. This can only be a good thing. The chairman of the board that found this out was interviewed at excruciating length on the matter.  This was such a waste of a golden opportunity; what could have been delivered in an upbeat couple of minutes was dragged out over a seeming age. It was presented in such a dull way that I lost interest, and before long all I could hear was "blah blah blah" on what really is far too important an issue to be reduced to "blah blah blah".

I wasn't *that* late to work, but as I arrived I realised I'd left my lunch at home, so  I thought I might treat myself to something special from the branch of Marks & Spencer at work. A bottle of pop, a posh bag of crisps and a poncey sandwich only cost six quid, and to add insult to injury they weren't that good. I shan't be treating myself to that again.

It is rather sad, but a disappointing sandwich was the highlight of a rather dull day today. With work done I came home, scoffed a rather good dinner, and gave myself a stomach ache…