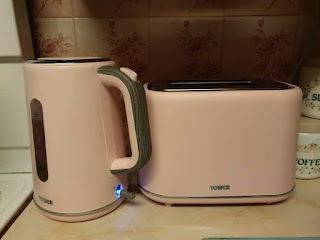 I slept well, and came downstairs to find Sid had been released from the lino-ed area of the house. er indoors TM” had got up to him in the night. Twice.

I made brekkie using our new kettle and toaster. Yesterday our kettle and toaster had been replaced with two pink monstrosities. I prefer the old ones, but I’m keeping quiet. With toast made I had a look at the Internet to what I’d missed overnight. As always I hadn’t missed much. There was an email from the Neighbourhood Watch people. It would seem there’s been a spate of wheelie bins being stolen recently; it wasn’t just ours that had gone missing. Mind you it seemed odd that there was loads of talk of wheelie bins and drainpipes going missing, but not a word about the dead body which was found in Great Chart recently.

I got the dogs on to their leads and we went for a little walk. I thought about Kings Wood and Orlestone but in the end we just did a quick loop out to the co-op field and back again. Pogo barked at pretty much everything he could find to bark at, but other than that the walk was relatively uneventful.

With walk walked I drove my car a little closer to home so I could unload the bags of shingle I’d bought yesterday. And with bags unloaded I carried them out to the back garden (one at a time) listening for the car’s alarm which chose not to go off this morning.

I then decided to ignore the weather forecast and to crack on in the garden. Our old edging stones have shifted and moved over the years, and I decided to replace the lot with small sleeper-like planks of wood. Over the course of last Sunday and Monday I got the left-hand side of the garden done, and today I made a start on the right-hand side. Scraping shingle back, digging a little trench, putting planks into place, screwing them together, putting shingle and soil back… So easy to type; so much hard work to do. Whilst I was at it I gave the shingle around the biggest water feature a serious seeing-to. The chicken wire under the gravel was poking up in places and, not wanting the dogs to hurt themselves, I raked up all the gravel, put down some think grilles to hold the chicken wire down, and covered that all over too. I also had a stroke of genius which involved relocating all the red chippings from around the monkey-puzzle tree to make the garden look a tad more symmetrical. I would have liked to have got more done today, but by mid-afternoon I was at the stage where it hurt to move.

It only rained once whilst I worked, and that was for less than a minute. As I worked so Fudge maintained his vigil at the pond; he does love watching the fish.. It was warmer today; warm enough so that he didn’t spend the day shivering. And Treacle “helped” by tiddling on the new turf that I laid on Monday.

As I do, I took a few photos as I worked.

The next phase is very straight-forward (he laughed) and should only take about two to three hours. I need some more red garden chippings for that though. Perhaps a trip to B&Q on the way to work tomorrow? After that is sorted I need to clean out the pond filter and get that going again for this year. And I also need to look at the area behind the pond. I have no idea what I will do there, but I need to do something. I also need to do something with the gravelled area by the shed. There’s a water feature in a whisky barrel which is looking rather tired. I have all sorts of ideas to make a large cascade, but the easiest (and probably cheapest) option would be to simply replace the whisky barrel.

You would never believe that I actually hate gardening with a passion.

er indoors TM” set off to visit “Daddy’s Little Angel TM” and “Stormageddon – Bringer of Destruction TM”. I settled in front of the telly and didn’t move. Mainly because I couldn’t…