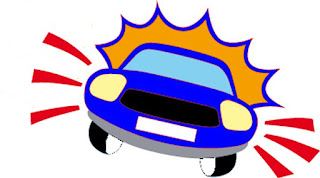 I had hoped for something of a lie-in this morning. I suppose I should be grateful that Sid started shouting an hour later than he did yesterday.
I cleared his turds (he’d only trodden in one of them) then over brekkie watched an episode of “Superstore” before having a little look-see at the Internet. My Facebook feed was filled with posts for some band called “Marylebone Jelly” – apparently I chose to follow them on social media some time ago. I wonder why.
And with no emails at all I got dressed, got the dogs together and set off.

My car alarm has been going off randomly. As “Stormageddon – Bringer of Destruction TM” would say it has been something of a “pain in the glass” and today the garage was going to have a look at it. But not the usual garage. My usual garage is very good, but it has become a victim of its own success. Whenever I need anything doing with the car they can never see me in less than two to three weeks. er indoors TM” had been to Henwood garage recently had had been happy with them, so I thought I’d give them a go if only because they could do it today and I wouldn’t have to wait till the end of the month.

We arrived, I left the car with them, and walked the dogs home. We came home along the river and past the station… and there was nothing to report on the walk. We walked home. Such an uneventful walk is something of a result when out and about with three excitable dogs.

Once home the dogs scoffed their brekkie and I went into the garden and got a coat of ronseal onto those planks that I bought on Tuesday before making a cuppa. I thought about going back into the garden and carrying on with some groundwork, but I thought better of the idea. It was rather cold. Fudge had insisted on being outside with me and he had been shivering.

Instead I wrote up some CPD and filled out the form that I’m hoping the vet will complete and send to the insurance company for me. and in a moment of boredom I read the newsletter that the Geocaching Association of Great Britain had sent me. You can read it by clicking here if you want to. It wasn’t a bad read I suppose.

I played a little “Candy Crush” on the lap-top, then took Fudge to the vet for a blood test. Whilst we were there we had a go on the vet’s scales. Fudge has put on a third of a kilogram in weight over the last week which I am seeing as something of a result. The vet said he seemed better, and took some blood. I handed over another hundred quid (well, ninety-eight) and left the insurance form with them in the hope that it might do my bank balance some good.

The garage phoned. They’d had the car for seven hours and could find nothing wrong with it. They’d given it a good going over, and then opened it and locked it many times and were unable to get the alarm to go off. They were very apologetic, and didn’t charge me anything. To be honest I’d rather they had. For all that they didn’t achieve anything they’d clearly worked on the car.

I brought the car home fully expecting the alarm to kick off and sat listening for it for the rest of the day.

Then the vet phoned. Fudge’s creatinine level is up on what it was a week ago which isn’t what we had been hoping to hear. But the vet said that the weight gain was a good sign. We are to keep an eye on him (as if we don’t!), continue his medication and review the blood test in three months’ time.

As the vet spoke to us so Fudge snored on the sofa without a care in the world. He has no understanding of how unwell he is.

er indoors TM” boiled up fish and chips which we scoffed whilst watching Sandi Toksvig and Prue Leith on holiday in some rather good holiday homes, and I then slept through two episodes of “Truth Seekers”; a show which doesn’t grip me.