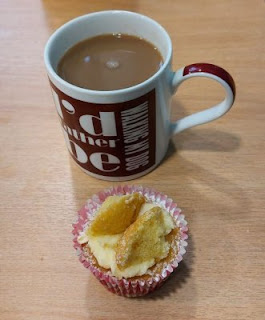 I slept like a log last night, finally waking after nine hours asleep. I made some brekkie, watched an episode of “Superstore”, got dressed quietly, and then shouted “who wants to come for a walk?”. Three dogs came thundering down the stairs, and we went for an early lap of the co-op field. As we walked there we met several young families on the way to school. One young mother was sensible and was jogging alongside her cycling child. But I felt sorry for all the other cycling children. It is difficult to cycle slowly. Very difficult to cycle at walking pace. And incredibly difficult to cycle at the pace of a young mother who is busy fiddling on her phone as she waddles oh-so-slowly up the street. So many mothers were periodically glancing up from their phones to shriek at their children who simply weren’t able to cycle slow enough.

We got to the co-op field, had a little bimble, and came home again.

I did have an idea that a walk before brekkie would give the dogs (and particularly Fudge) a bit of an appetite. Pogo and Treacle scoffed well; Fudge didn’t really.

By then the insurance companies had opened their phone lines. I tried chasing up the insurance claim for Fudge’s recent episode. As always the given phone number took me through to entirely the wrong company. I got transferred and put on hold for a few minutes.  And as is always the case with pretty much every company I phone, the recorded message wouldn’t shut up about a web portal which was utterly useless to me. I eventually got through to someone who said they had no record of any claim from our vet.

I phoned our vet who checked their records and told me they had emailed it all on the seventeenth.

I shall try again later in the week.

I then phoned the house contents insurance people to see if my new phone was covered on the insurance. I navigated their “press 1 for this, press 2 for that” and as I waited for a human to answer the phone the recorded message kept on about how I could do pretty much anything I wanted to do via their website. I had a go; I couldn’t.

In the end it turned out that my phone wasn’t covered, and if I added it, the excess I would have to pay wouldn’t be worth it.

I then popped round to the tip for my booked appointment. The place was something of a shambles, to say the least. With cars queuing back far too far up the street, the place could probably have taken triple the amount of trade at any one time. And to add insult to injury I was told to park about as far as was possible to park from where most of my rubbish needed to go.

I came home, grabbed Fudge, and popped him to the vet to go on their scales. His weight has held constant over the last week, which surprised me.

I then wasted ten minutes trying to get phone insurance elsewhere, but failed. No one seems to have heard of my brand of phone.

I set off for work, and drove up the motorway. I say "motorway"; with this Operation Brock being a permanent fixture there isn't a motorway between Ashford and Maidstone any more; it is just a dual carriageway. And a rather slow one at that.

I took a little diversion to the petrol station where I got lunch, and had a little laugh at one of the normal people. Some idiot had driven past my car to use the petrol pump in front of mine, but was edging their car to and fro since they couldn't actually get their car anywhere near the pump. I drove round them, and as I passed I watched her drive right back to where my car had been, and then drive forward. Her impatience had achieved nothing. As I drove past I could hear the row being shouted between her and her partner.

And so to work where nothing much had changed in the week since I was last there. In fact the most exciting part of the shift was tuning my new phone into the works wi-fi.

It is a really dull day when the highlight is a trip to the tip and setting up wi-fi. But (at least) there was cake.
Posted by Manky Badger at 10:45 pm