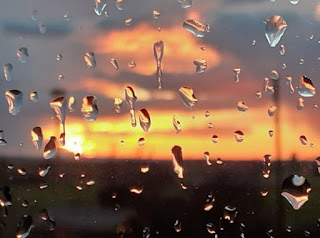 Sid had a barking fit shortly before three o’clock this morning. er indoors TM” had been down to him once; I came down and sat with him for twenty minutes. He soon shut up and went to sleep whilst I watched an episode of “Superstore”.

With Sid snoring I went back to bed, and slept through till eight o’clock. Cranking the toaster to full power I got non-floppy toast. It wasn’t overly crisp, but it was (at least) not floppy. As I scoffed it so I shared the crusts with Fudge.

Not much was happening on the Internet this morning. One or two friends had posted twee memes. These things annoy me. The people who post about “When life gives you lemons, make lemonade” have rarely been handed lemons by life.

Two friends had birthdays today – I sent out birthday messages.

In between these, my Facebook feed was filled with adverts for some brewery in the Midlands who were asking about thirty quid (including postage) for five and a half pints of their beer. Tesco does a decent variety of ales and you can get more than five and a half pints for less than a tenner. I’m all for supporting small businesses, but only within reason. Perhaps if this brewery spent less money on the amount of adverts they put on Facebook they might be able to reduce their overheads.

The rain rather put me off carrying on in the garden. Instead I popped to Tesco to get a pair of black shoes for next week’s funeral. I didn’t have a pair of “posh” black shoes; I’ve been wearing trainers/walking shoes to work for a couple of years now.

Tesco was much the same as ever. Despite all the signs saying that people must shop on their own, pretty much everyone had taken a buddy with them, and the “children from hell” were out in full force. Had either of the fruits of my loin had screaming fits in the supermarket when they were small, they would have been given something to scream about. They knew it, and so rarely had screaming fits in supermarkets.

I also got a bottle of red wine; I took a while choosing. Have you ever read the tasting notes on bottles of red wine? “”Goes well with boef au poubelle”, or “the ideal accompaniment to poulet en diarrhée”. They *never* refer to anything that real people actually have for their dinner.

Fudge is a serious worry at the moment. With his spondylosis, chronic renal failure and recent pancreatitis he isn’t a well dog. But assessing how ill he is takes some doing. Was he going so slowly because the walk was far too much for him, or was he going slowly because he wanted to bimble about at his own pace rummaging in the hedgerows? Take his brekkie this morning. I was worried sick when he turned his nose up at two different bowls of food, but he then scoffed the crusts off of my toast and yummed up a bowl of “Cesar”. There was no lack of appetite; he was just being very fussy.

We all came home, and I had a little look at the accounts. I’ve revamped my Excel spread sheet with which I count my pennies. And being a particularly mean sort of person I like to account for every penny.

As I fiddled about so the postman delivered the council tax bill for the next year. It has gone up by five per cent. Interestingly I’m (supposedly) only getting a one per cent pay rise this year since the Minister for Health says that is all the country can afford. I might just tell Ashford Council that they can piss off as one per cent is all that I can afford…

er indoors TM” set off to spend a couple of hours with “Daddy’s Little Angel TM” and “Stormageddon – Bringer of Destruction TM”. Rather than getting in their way I spent a couple of hours seeing to the ironing. It took some seeing to.

er indoors TM” came home with Chinese which we scoffed whilst watching Celebrity Bake-Off. It was rather good, and I had actually heard of two of the so-called celebrities on it.

Hopefully it won’t be raining tomorrow….