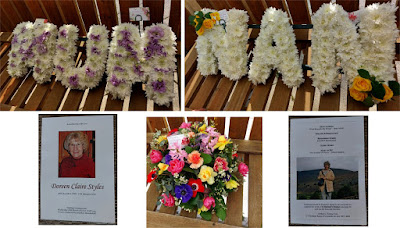 I was wondering how I would react to yesterday’s jab. My arm was rather sore, and it woke me every time I moved overnight, but other than an iffy arm I seem to have got off unscathed.

I ran some bread through the toaster (twice) in a futile attempt to turn it into toast, then had a look at the Internet. Joshuasmuma Banditband (!) had sent me a message on Facebook. He was trying to push a website about nudey ladies without any clothes on. I wasn’t having any of that nonsense. Not much else was happening on the Internet, and it was at this point that “Daddy’s Little Angel TM” came downstairs in her Pug onesie. She’d stayed overnight so we could make a prompt start this morning.

We all got dressed, and set off for Hastings. Immediate family gathered with my Dad at his house. And a small drink to calm my nerves became four whiskies.

The undertakers soon arrived, and off we went. The funeral passed in something of a blur. The undertakers were incredibly professional. The celebrant (ex-TV celebrity Jonathan Mendenhall) led a short but well-planned service which was really well done. He’d taken the trouble to contact family members and gave an address which was personal and all about my mum. I couldn’t help but think of my brother in law’s funeral a few months ago when a bored priest just stood and read out the standard funeral service from a long-outdated church service book.

We were allowed thirty people at the funeral; there were thirty there. I chatted with aunts and family members for a bit, then Mum’s immediate family (our tribe and my brother’s tribe) went back to Dad’s where we had the sort of buffet that Mum would have put on; really good food to scoff, and far too much of it.

I slept all the way home…
Posted by Manky Badger at 7:30 pm