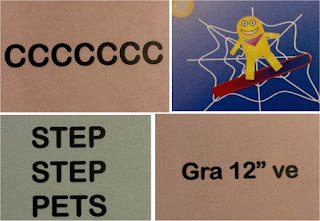 er indoors TM” inadvertently woke me at two o’clock when she started fighting with the dogs. It would seem that she also woke my phone as it then started beeping with messages for the rest of the night. My old phone used to randomly connect to the Internet when it wanted to, and it would seem that this new one does too.

I dozed between beeps, finally giving up trying to sleep at about half past five. As I watched an episode of “Superstore” I scoffed a bowl of granola. er indoors TM” had bought a bag of the stuff the other day; I don’t know where it came from but it was a rip-off. One bag was good for about three servings of the stuff.

With Sid snoring by my side I had a quick look at the Internet. Our Munzee clan has reached Level One – that took some doing. And on seeing nothing else at all had happened overnight I sent out some birthday wishes, loaded the dishwasher and set off to work desperately hoping I’d feel better when I got there. Last night’s bottle of red wine had given me the headache from hell.

It was a rather bright morning as I drove to work, but very cold. As I drove the pundits on the radio were getting rather over-excited about the launch of another Scottish Nationalist Party. This one is taking its name from the Gaelic for "Scotland" to prove it's bona fido (!) There was an interview with one of the leading lights of this new party. I didn't understand a word the chap said; everything that came out of his mouth was in a rather monotonous unintelligible drone.

I've said before that some people really shouldn't be on peak-time radio regardless of how important they might be. You'd think the radio presenters would do a sound check with these people, and either tell them how to make themselves understood or tell them "no chance" *before* going live, wouldn't you?

I suddenly braked sharply to avoid being pushed off of the road by a lorry of "R.J. Surfaces" which was wandering across all three lanes of the motorway between junctions seven and six. When I eventually came past it, I could clearly see that the driver was quite blatantly fiddling about with his mobile phone.

I wish people wouldn't do that.

I got to work; the night shift were keen to go home. I did my bit, and when the late shift rolled in I was equally keen to shove off.

I came home (via the works branch of M&S) with iced buns. Once they were devoured I popped to B&Q where I spent over forty quid on tomorrow’s planned garden project. I had this idea that B&Q would be far quieter late in the afternoon today than they will be tomorrow morning. And bearing in mind they don’t open until ten o’clock tomorrow the day would be half-gone by the time I would have got the stuff.

er indoors TM” boiled up a very good bit of dinner. We might have taken a chance with the seafood sauce that (supposedly) expired two years ago, but it was tasty stuff.

We joined in with the family Zoom bingo/quiz night. After only two bingo numbers had been called we had to pause proceedings. With no warning at all Sid was suddenly screaming in pain and/or terror and all the other dogs were mobbing him. After a few minutes of confusion it transpired that he’d got a claw caught in a blanket (he *hates* his paws being touched) and his screaming had upset the other dogs who wanted to see what was wrong.

The excitement was over as quickly as it started. Bingo resumed, and just as the dogs started snoring so there was another pause to the bingo. The sound was muted so that one of the younger members of the family could have a poo.

Kirsty then ran the quiz. A general knowledge round, a history round (guess the year) and twelve catchphrase questions.

Family zoom-quiz-bingo is going to continue after lockdowns are but a memory. He on-line bit means that we can meet up without worrying (too much) about the dogs being on their own. Others can join in without worrying about little ones’ bed times.

I do like the family zoom-quiz-bingo sessions. Even (to be honest) if I do lose a *lot* more than I win.
Posted by Manky Badger at 9:57 pm