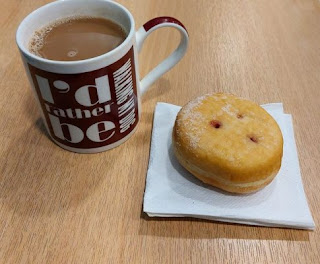 Fudge was originally “My Boy TM”’s dog, but he was already a year old when the first fruit of my loin took him on. We don’t really know much about Fudge’s first year, and sometimes I wonder if he was mistreated in that time. Sometimes he appeared to be pathologically terrified for no reason at all. Take this morning for example - as I got up so Fudge came downstairs with me. We found Sid had crapped on the lino overnight. On seeing the turds, Fudge’s demeanour changed entirely; his ears went back and he crept outside looking incredibly frightened. Did he think he would get the blame for Sid’s turds?
I cleared the turds, and over toast watched an episode of “Superstore” whilst Fudge and Sid slept. Fudge wouldn’t come close for the crusts; he watched me from his basket (whilst pretending to be asleep).

I then sparked up the lap-top and did the monthly clan admin for our Munzee team. Again I’ve been asked to be the clan leader (which is something of a result), and with admin-ing done. I had an email from the power company detailing my use of gas and electricity over the last year. That was kind of them – that information will be really useful for when I pack up with them and move to Scottish Power once the ombudsman stops farting about. And with nothing much happening on Facebook I got dressed, and set off work-wards.

As I drove up the motorway the pundits on the radio were talking about heated conversations which had been taking place at the World Trade Organisation. Many of the world's poorer nations feel that pharmaceutical firms manufacturing the Covid-19 vaccine should either make enough for everyone in the world or voluntarily hand their technology to developing countries. However pharmaceutical firms manufacturing the Covid-19 vaccine feel they aren't operating a charity.

It is the old story. Is access to healthcare a right (like it is here in the UK) or something you buy like any other commodity (like it is in the US)? Personally I'm of the opinion that free healthcare for all is a good thing, and shouldn't only be for the rich. But I am reminded of the American (so-called) Christians I met when I took scouts to America. They felt that the UK's NHS and free healthcare for all was a "commie-pinko" idea and they claimed they would rather sell their houses and live on the streets rather than be provided with free healthcare.

I popped into Sainsburys in Aylesford for petrol and was amazed by the contrast between that filling station and Sainsbury’s one in Ashford. At Aylesford the assistants behind the till assist you and do their job. In the Ashford one the (so-called) assistants instruct you on how to scan in your purchases and your nectar card, point at the card reader with which you pay, and then nod at the receipt dispenser so that you can tear off your own receipt. I prefer the assisted service at Aylesford rather than the self-service at Ashford.

I got to work - there was cake today, and Easter eggs too. During a quiet moment  I thought I might chivvy up the pet insurance people. What with Easter coming up I could see there being yet more delay. Eventually I got through to someone who said they'd received nothing from me. When I told her that on Monday I was told they had received the email she then changed her mind and said they had received it. She wasn't happy when I asked which it was - had they got it or not? She assured me she had the email and said it would be dealt with within ten working days. She *really* wasn't happy when I said that eighteen working days have already passed.

I'm told I should phone back at the end of next week if I've heard nothing in the meantime.

An early start made for an early finish. I did have plans to come home via B&Q for more bits for the garden, but realistically I’ve got to stop spending money until such time as when (or if) the vet insurance stumps up. I’ve got quite a bit of ronseal in the shed; I shall paint fence panels for a bit.

Instead of going to B&Q I took the dogs round the co-op field where we didn’t meet anyone at all, and so had a rather good walk.

I ironed shirts, and then fell asleep in front of the telly…