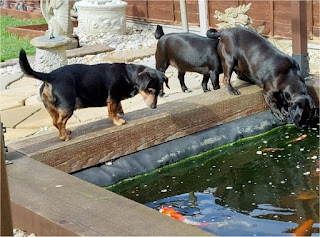 Having been clouting er indoors TM” every twenty minutes throughout the night I gave up trying to sleep shortly after seven o’clock and made myself some brekkie. I scoffed it whist watching an episode of “Superstore”, did a COVID-19 test (negative) and carried on struggling with geo-puzzles.

There’s no denying that I’m getting cross with these particular geo-puzzles. There is a series of puzzle geocaches near where we are planning to go on holiday (in Lincolnshire) in a few months’ time. Before we can actually find any of the film pots we have to solve a puzzle to work out where each one is. Over the last few mornings and evenings I‘ve had a go at all of them. I’ve solved four, one is a crossword that isn’t working, one (I think) is a griddler, and I’m on the point of giving up on the rest. I’m just wondering if we might be better off finding somewhere else to go for a walk whilst we are on holiday. There are two sorts of people who hide geocaches; those who want them found, and those who do not.  The person who hid this lot is definitely in the latter group.

After two fruitless hours I gave up. (er indoors TM” spent all afternoon working on them  to no avail).

We drove round to the abode of “My Boy TM”.  er indoors TM” and Cheryl had surplus flowers to return to the florist, and the first fruit of my loin was buying more heavy shopping. Whilst the girls did flowers, I was driven to Wickes where we got a job lot of compost. Compost is surprisingly heavy stuff.

With compost composted I came home and loaded a whole load of rubbish into my car in readiness for tomorrow’s tip run. With the remains of rotted fences, flower pots that have rusted through, garden recliners that haven’t reclined for years and all sorts of tat I now have a dustbin lorry rather than a car.

It only took an hour and a half to load up.

We then took the dogs up to the co-op field where Fudge utterly disgraced himself. Despite being incredibly ill, he found the energy to chase after other dogs and play “dog piggy backs”.

I wish he wouldn’t.

er indoors TM” made a light lunch of coffee and the beer-bread she’d baked yesterday (which was rather good) and we scoffed it whilst slobbing on front of the telly watching a “Four In A Bed” extravaganza. I do like that show. Today one of the B&B proprietors were constantly banging on about their corporate background, wouldn’t stop spouting management catchphrases and SWAT analyses… and their B&B was frankly crap. I can’t help but feel there is a place for management-catchphrase-spouting-types and that is in cloud-cuckoo land.

I then had a look at the credit card receipts in my wallet. Being a rather mean sort of person I account for every penny that I spend. Regular readers of this drivel will know that over the last couple of weeks I’ve been working in the garden quite a bit. It came as a shock when I worked out that in the last three weeks I’ve spent almost four hundred quid on the garden.

I really must chase up the vet insurance people to see how much (if anything) I can get back on the (over) nine hundred quid I’ve spent on Fudge’s pancreatitis. But what is money for, if not to squander foolishly? If I didn’t spend money on garden and dog I’d only buy more Lego.