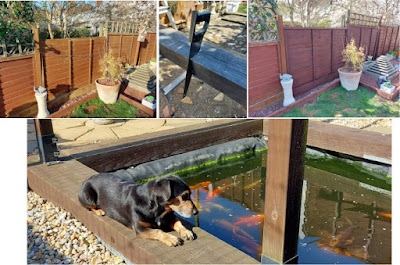 I was woken at half past three by an odd wheezing coughing whimpering sort of sound. Fudge was clearly poorly and er indoors TM” was already up with him. I moved him (and his bed) onto the foot of our bed and lay with him. After a few minutes he stopped making the strange noises and went to sleep. I lay awake in the dark worrying until half past six when my phone told me to get my arse out of my pit.

It (quite literally) does that. Ain’t technology wonderful.

I scoffed some brekkie, I watched a little “Superstore” then taking care not to disturb anyone I got dressed and tried a little experiment. I picked up the dogs’ leads. Instantly Fudge came charging down the stairs having recognised the jingle sound they make. He wanted to go out regardless of whatever had been wrong in the night.

Pogo and Treacle soon followed him, and we all went out. We drove over to the garage. Over three weeks ago I’d taken my car to Henwood garage as my usual garage was too busy to see me. Henwood garage could find no reason why the car’s alarm intermittently goes off whenever the mood takes it. My usual people managed to fit me in today, so I left the car with them, and we walked home.

We had one or two “episodes” as we walked home. One child (being dragged to school by his mum) ran up to Pogo and screamed at him. Before I could say anything the child’s mother apologised profusely and asked the child what (the f…) he was doing. The child started crying , and in between tears, he admitted he had absolutely no idea why he’d run up to a strange dog and screamed at him.

And then we met a child who was supposedly frightened of dogs. If I was frightened of dogs and saw three walking along the path I would just step to one side and let them pass. Wouldn’t you do the same? This child didn’t. He started jumping up and down, waving his hands in the air (like a demented windmill), and then ran in circles screaming like a banshee.

As I told his irate father, the dogs joined in and copied him because thought this was some sort of game. I could see this father’s brain slowly working it out, before he agreed that if you are frightened of dogs, then seeming to be asking them to play is a frankly stupid thing to do.

I was glad to get home.

One home I gardened. I took that lump of wood I bought yesterday, cut it to size and painted it. Whilst it dried I painted two fence panels, then used the dried painted wood to bodge a broken fence panel, and with it bodged I could screw it firmly into place. I then painted that panel, and sawed the sleepers that I’d got from “My Boy TM” on Sunday. Have you ever sawed a sleeper? It takes some doing. I got the sawed sleepers painted too.

As I worked so the garage phoned. They couldn’t find anything wrong with the car at all, and thought they might just try locking it and walking away to see if they could get the alarm to go off. Seeing how they are the experts I didn’t know what else to do but agree. They phoned again later  the alarm didn’t go off for them once.

I’d still got plenty more to do in the garden, but having (again) reached the stage where it hurt to move I decided to pack up. As well as aching I was rather warm too. There had been frost on the grass as we’d walked home through Frog’s Island earlier; I caught the sun today in the garden

I phoned my dad to update him - he’s quite intrigued by whatever is wrong with my car. And I wanted to see if he was OK – today would have been his sixty-fourth wedding anniversary.

er indoors TM” set off to Folkestone to see “Daddy’s Little Angel TM” and “Stormageddon – Bringer of Destruction TM”. I sat myself in front of the telly, activated Netflix, and fell asleep for probably about three hours longer than I wish I had.

This gardening lark is hard work.
Posted by Manky Badger at 10:11 pm