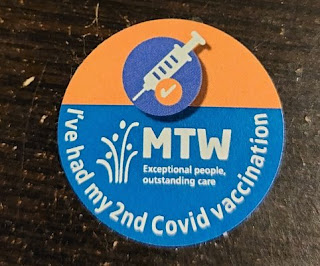 Last night er indoors TM” told me that setting five on the toaster gave her the perfectly cooked slice of toast. This morning setting five on the toaster gave me a slightly warmed (but utterly untoasted) piece of bread. I ran the warm bread through the toaster again. And again. Eventually it developed a brownish hue, and realising that was the best I was going to get I cut my losses and scoffed it whilst watching an episode of “Superstore”. As I scoffed Sid sat with me. Sometimes he wants attention, but mostly he just sleeps.

I then sparked up my lap-top, but with absolutely nothing having happened on Facebook, no one having a birthday, and no emails at all I got dressed and set off on my pre-work mission.

I drove round to “My Boy TM”'s house where Cheryl was waiting for me. I picked up the flowers for tomorrow's funeral and drove them down to Hastings. As I drove the pundits on the radio were interviewing some General or other about proposed changes to the Army. I have no idea about whether or not the chap was any good as a General, but he would make a marvellous manager.  Apparently the "nature of war" has remained unchanged over the years but the "culture of conflict" is fluid.

What does any of that mean?

There was also an interview with the Minister of Health who also talked a load of rubbish; relying on catchphrases rather than saying anything of note. And then they wheeled on some top scientist who was rather excited because quarks aren't behaving as they should. My dogs don't behave as they should, but I get pissed off rather than excited, and no one puts me on prime time radio.

I stopped off at my Dad's; I had some paperwork he needed for insurance stuff. We had a cuppa, then I drove on to the undertakers where I dropped off the flowers for tomorrow's funeral. The undertakers had a sign in the window proudly boasting that they were in the "Good Funeral Guide"

There really is a "Good Funeral Guide" - can you believe it?

I then headed in the vague direction of work and stopped off in Cranbrook. There is a geocache near the car park. You need to solve a puzzle to know where to look for the thing. I'd solved the puzzle months ago but hadn't had chance to go looking for it. After a few moments hunting, it was soon in my hand. I haven't found any geocaches for a while - I need to get back into that game.

I then wandered up to the co-op for some shopping. My piss boiled when I realised I had to put a pound into the trolley before I could be trusted with it. It wasn't that I didn't have a coin (I did); I just find it insulting that I can't be trusted with a supermarket trolley.

I went into the co-op, got lunch and stuff... and completely forgot to get the jam which I had specifically gone there to get.

As I drove away I couldn't help but think of the last time I parked my car in Cranbrook (Feb 10th) when I needed the help of a passer-by to push my car off of the ice.

I got to work and did that which I couldn't avoid for an hour or so, then slipped off for my second COVID jab. I must admit to being amazed at the efficiency with which the jabbers were operating. With loads of people being seen today (I think the total ran well into the hundreds) I was in and out in about seven minutes.

I had been warned of possible side effects, but they warned me of those last time and I didn't have any. I know of several people who have been ill with the second jab. Will I be poorly tomorrow?

Time will tell - it always does.
Posted by Manky Badger at 10:43 pm