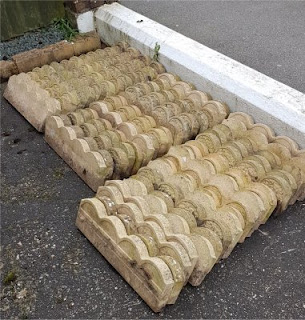 I got up to Sid at about three o’clock, and watched an episode of “Superstore”  whilst I was up. Actually doing something when I am awake in the night seemed to give me better sleep. Strange!

I got up shortly after seven o’clock, and today the toaster cooked the bottom half of the toast, but not the top. What was that all about?

The internet was rather dull this morning; mind you I was bombarded with adverts from a brewery in Wakefield who were knocking out tins of stout at over a fiver a tin. I suppose these micro-breweries must get custom from their adverts on Facebook. I find I can get the beers from many of the micro-breweries from local shops on the way to work, or from the off-licence in Tenterden, or from the breweries own shops. But (quite frankly) all the time they are charging three times the price of comparable beers in Tesco I’m not going to be very inclined to spend money with them.

I took the dogs for a little walk. We went out to Great Chart again, and unlike yesterday Fudge kept up and we went a lot further. As we walked we met a young mother with one child in a papoose-carrier, one in a push chair, one toddling about, and a dog the size of a horse pulling like a thing possessed. In order to avert chaos I blew the whistle to get my three hounds out of her way. And (as is always the case when it works) the whistle training was rather impressive to see. However it rather upset the young mother. She was obviously near the end of her tether when she asked me how I got my dogs so well trained. Her dog (so she told me) was a nightmare. It turned out that no one had told her how to train a dog. It is easy - play on their greed. Blow the whistle and make them sit when you give them a treat and it doesn’t take long for them to come to you and sit when they hear a whistle. They are expecting a treat, and as long as they keep getting treats (most of the time), the whistle-thing works. Or that is it works all the time they want a treat. However if whatever mayhem they are causing is more enjoyable than a treat, then you are stuffed. I didn’t tell her that last bit.

We came home, and I spent half an hour moving the old garden edging slabs through the house. Having laid new lawn edges I was left with forty-eight redundant stone edges. Wayne and Lyn had said they could use them, and I was glad that the things would be getting a new home. Moving them through the house and then into their car was one of those jobs that was far easier to write about than to do.

It only took an hour or so.

Pausing only briefly for a cuppa and a chocolate muffin I then got some ronseal onto the sawn edges of the planks I’d put down over the last week or so. That was only the first item on a frankly mega itinerary of stuff I had planned to do in the garden today. But just as I was finishing that job so the heavens opened. So much for garden, eh?

As I pootled on the Internet (over a cuppa) I read that er indoors TM” was now eligible for her COVID-19 jab. The NHS website offered her an appointment in Alton and gave a postcode that was ninety-six miles from home. But clicking on the “map” option of the website gave a location in a field four miles away in Brabourne.

Equally ridiculous was the conversation I then had with the pet insurance people. I’d downloaded all the forms to claim for Fudge’s recent illness and had left them with the vet on Friday 5 March. The people at the vet’s were going to complete the forms and post them on. The pet insurance people had no record of any claim… and said they weren’t likely to have one either. Apparently they only accept claims via their on-line portal or via email. I shouldn’t have used any forms, and they were at a loss to explain what the forms were doing on their website. I got an email address from them and asked the vet to email copies of the claim forms to them.

Let’s hope they stump up, eh?

I then spent the rest of the day (about eight hours) sitting on my bum watching the Sky-Q’s offerings. All rather entertaining…  Hopefully my phone will be working by the morning – it would seem to have packed up.