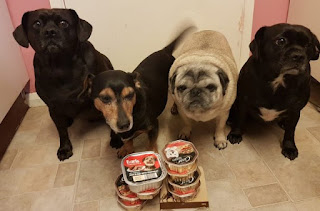 The noise of the rain rattling against the window woke me at half past one, and then a concerto of snoring kept me awake. I couldn't do anything about the noise of the rain, but I could do something about the noise of the snoring. I gave the snorers a little shake... and then a larger one. Eventually snoring and rain both subsided and I had a rather precious bit of peace until Sid started barking. Having been watching him "like a pork" (to coin a phrase) I have a theory with Sid. He knows when he needs a poop, but it is all rather immediate. When I "have the need to download" I realise this with quite a bit of notice. I have time to make my leisurely way to Trap One.
However with Sid, things are all rather more urgent. With no notice it is suddenly "It's in the bomb bay!!! ... Mr Brown is at the window!!! ... too late!!!" and the whole thing is over in about ten seconds. *If* you can spot the first one or two of those ten seconds and bundle him outside then all is (relatively) well, but that takes some doing.
Did I ever mention that I never wanted dogs?

Seeing we'd run out of granola I made some toast. And seeing we'd run out of jam I had marmalade on it. I scoffed toast whilst watching a couple of episodes of "Superstore" and then set off to work at about the time when most people would be thinking about getting out of their pits.

As I drove to work through another foggy morning the pundits on the radio were talking about yesterday's budget. As always, what the Chancellor gives with one hand he takes with the other. Short of actively attempting tax evasion there's not a lot I can do about his decrees, so there it was.

There was also talk about Prince Harry and his (let's be honest) total mistake of a wife. I would imagine anyone marrying in to the Royal Family would be in for a shock. I would have thought that the Duchess of Sussex might have benefited from  a little coaching for her role. It is quite impressive how she has taken Prince Harry from  a national hero to a national embarrassment in such a short space of time.

During a lull in proceedings at work I found an on-line budget calculator which told me that after the budget changes take effect I will be seventeen pounds better off each year. Oh well - it's better than nothing I expect. Mind you I suspect that it doesn't account for cars with dodgy alarms or small dogs with dodgy kidneys.

As I worked I had a parcel arrive for me. A colleague who works at Tunbridge Wells had contacted me last evening. Her husband's boss's dog didn't like the dog food they'd got for him. Would my dogs like it? Bearing in mind that Pogo would eat anything (and the tin it comes in) I said "Yes please".

With er indoors TM” running an errand for “Daddy’s Little Angel TM” I walked the dogs round the block, then tried to get them to pose for a photo. Put four dogs in line, put some food in front of them, take a photo. How difficult can it be? After fifteen minutes I got probably the best piccie I was going to get.

I then had a go at supervising dog dinner. This is usually a task that er indoors TM” does; I think I did well having it all pass off without a squabble.

I then tuned into the weekly geo-Zoom meeting whilst the dishwasher did its thing.

er indoors TM” came home with KFC. We scoffed it whilst watching “Truth Seekers”, and then Sir Tony Robinson in “Walking Through History” in which Sir Tony walks here there and thither through Britain. Watching the show closely he’s got the right idea. He goes for a fifty-ish mile walk over a few days carrying only a day bag. He clearly has his luggage sent on ahead to his hotel for him. If I could get someone to do that for me, I could do some *serious* walking (once my knee is better).
It seems odd that Baldrick is now a “Sir”…