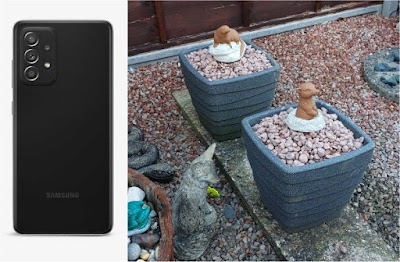 I slept like a log. I woke shortly after half past six which (for me) was a rather good night’s sleep. I came downstairs and stopped at the bottom step from where I conducted a little survey of all of Sid’s turds before gathering them up.

I chivvied Sid outside, had a shave then made some toast. Even at full power and with the “defrost” button activated, the toast only comes out lightly browned, and the top inch was just warm bread. I had a minor altercation with er indoors TM” on the matter. She is adamant that the new toaster stays because it looks pretty. Its ability to toast bread is very much secondary to its ability to look pretty.

I watched an episode of “Superstore”, then there was a knock on the door. As is always the way when there is a knock on the door, all the dogs went absolutely bat-shit-mental. It was the delivery man with my new phone. In all the excitement of getting the dogs away from the door I inadvertently found a turd that I had missed earlier, and with phone signed for I then spent a few minutes swabbing up trodden-in pug poop.

Using er indoors TM”’s phone (after a little while) I got through to the nice lady at Sky who talked me through setting up the new phone. Or tried to… The chap I spoke with yesterday had an Indian accent and I had no problems understanding him. The nice lady I spoke with today was a Geordie and I understood maybe one word in five. But I was glad for her help. I don’t think I would have managed without. Mind you it was rather worrying to have the phone announcing “Just a few minutes” whilst nothing was seemingly happening. With the nice lady’s help I got the thing working at a rather basic level, set it doing some re-organisation, and took the dogs round the block and up to the co-op field for a walk.

We had a good walk; we met absolutely no one at all, and consequently had no episodes at all. Just the way we like it.

With walk walked I then sat on the sofa and spent a couple of hours updating apps and entering passwords on the new phone. I have a list on my lap-top which has all my passwords for “fart simulator” and “dalek voice changer”, but unfortunately not the passwords I need for Amazon or Google or Facebook or anything even remotely useful.

I eventually got the phone to the stage where it wanted to update its software, so I left it to it and went into the garden.

It seemed ironic that he only day this week that didn’t have rain was the one day I had something other than gardening to be doing.

Have I ever mentioned that I hate gardening? Today was a good example of why. With not-so-nice-next-door’s fence having collapsed there was no effective border to the shingle at the far side of the pond. I have some huge concrete cores that were anchors for the fence posts in years gone by that are far too heavy for me to move on my own. I heaved three of them the entire length of the garden and used those to mark a border. I then levelled up shingle and put out some of the garden ornaments, and then had a look at one of our potted plants.

We have three potted plants in the garden. (I’m not counting er indoors TM”’s  weeds). Together with pot and soil, each of these probably weigh more than I do. Two of them make a nice surround to the largest water feature; the other just drops its leaves all over the shingle and makes a mess. So I heaved this one off of the shingle, and spent a little while dragging it here, there and thither until I found somewhere that it looked OK.

I then had a stroke of genius. On 7 September last year I went to Tesco in Pembury where (to quote my good self) “I also got some grey flower pots which might well be ideal for a rockery project I have in mind”.

I have absolutely no idea what that rockery project might have been; those flower pots have been kicking round the garden (in my way) for six months. So I used those, the left over bags of shingle from Monday’s trip to the stone merchant, and two of the small garden ornaments I got from Whelan’s yesterday to make a couple of garden rock-pot-thingies. I thought they looked OK.

I then had a bit of a tidy-up and a sweep-around and felt knackered. Several hours of hard work in the garden and for all that the garden looks OK, I would have to point out the changes that have taken place over the last week.

I came in and carried on fiddling with the new phone. Whilst I fiddled I put an advert on Facebook to see if anyone wanted any of the soil I’ve accumulated. Over the years I’ve acquired quite a lot of soil into buckets and pots. I’ve no use for it, and I’m told that the local tip charges if you want to get rid of soil.

Within minutes I had a reply from someone who wanted soil. He arrived within the hour and took a dustbin full of the stuff, and I’ve put a load more into the front garden in the hope he will come back for more.

How easy it is to type that…

I then spent nearly two hours transferring the mobile banking app to my new phone, and an age connecting my smartwatch.

The new phone doesn’t seem to be charging...
Posted by Manky Badger at 9:20 pm