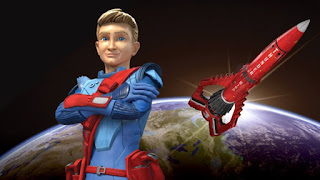 Have you ever brushed your teeth with Corsodyl toothpaste? I did this morning. It was perhaps one of the most foul things I have ever tasted. How does this stuff keep going when it tastes so bad?
Over brekkie I watched an episode of “Thunderbirds are Go”. For all that it is obviously a children’s program it is very hit-and-miss, this morning’s show was “hit”. Especially when Thunderbird 3 ran out of fuel.

Working on the principle that the Internet doesn’t look at itself I had a quick rummage in cyberspace. Those who crave attention had been doing so on Facebook overnight as they regularly do. Cryptic postings abounded. I also had a friend request from a bloke wearing a dress. I am reliably informed that in this twenty-first century if a man wants to be a woman, then (s)he is perfectly entitled to pretend to be so, and that I am to go along with the pretense.
Perhaps I’m just a little too reactionary sometimes?

I had a few emails as well, and in a novel break with tradition I had a request to join my LinkedIn network from someone of whom I *have* heard. Welcome aboard Tracey – I’m sure you’ll find it a disappointment…
I also had an email telling me about another of the world’s top one per cent of geocachers. This person has hidden one traditional cache which was eventually archived by a reviewer (because they didn’t respond to the reviewer’s requests to replace it when it had been missing for months), and they have also hidden four Wherigo caches. I (on the other hand) am rather insulted that having contributed *far* more to the hobby I haven’t had so much as a “cheers” off of geo-HQ.
You’d think that after a year I would have let it drop, wouldn’t you?

As I drove to work I listened to the radio, Today the pundits were interviewing some woman. Claiming to be British, her house was in Luxembourg and she actually works here, there and thither all over Europe. Her professional future is uncertain after Brexit as a working visa for such an itinerant worker isn’t something that is looking very likely..
I would have thought the obvious answer for her would be to apply for citizenship of one or other of the European countries in which she works. However this didn't stop the producers of Radio Four wasting ten minutes of valuable air-time in making a mountain out of a mole-hill. Sometimes it amazes me how much time the people on the radio waste in trivia like this.
Meanwhile the theory that aliens are planning to take over the universe seems to be gaining ground.
Killer aliens isn't a new idea, is it? Mind you, it seems strange to me that it has taken so long for people to stop laughing at the idea, and to start being scared by it.
Perhaps Alan Tracey might sort them out for us…

I got to work and did that which I couldn't avoid. As I worked the dentist again texted me. They had a cancellation and did I fancy having an appointment at half past two this afternoon? Bearing in mind my next appointment isn't for a few weeks they seem to be getting just a little ahead of themselves.

Being on an early shift I left work with time to do a little shopping. I’ve plans to brew a job load of beer (like I have done in the past), but in the intervening years since I last made any, so many home-brew shops have closed down. I eventually located a home-brew shop in Faversham and parked as close to it as I could. It is a good job that I am happy to walk quite a distance; many people wouldn’t have bothered walking quite that far.

I got what I needed, and came home to walk the dogs. As we went round the park we met a young lady who had a screaming fit on seeing us. In between hysterical sobs and gulps she told me that she was terrified of dogs. I looked her up and down and said (without thinking) that she was being bloody stupid. From her reaction it was clear that no one had ever told her that before. And from her expression as she watched my hounds walking past I suspect she’d finally realised just how stupid she was.
Perhaps I might have been a tad more tactful; if I had she would still be terrified of dogs.

"er indoors TM" was off out at some Madonna tribute thingy this evening so I’d been left to forage. Me and the dogs had kebab and chips for tea (again). Bearing in mind it is national fish and chips day I was tempted by a bit of cod (aren’t we all?) but the kebab shop is closer to home and half the price.
Once I’d done the ironing I was ready for bed… I’ve just worked five days on the trot and I’m worn out. How do people do it all the time?