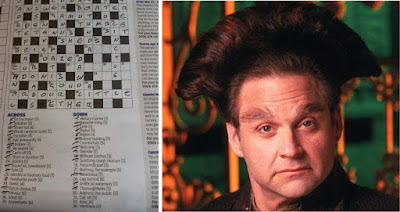 Every night before I go to sleep I check my phone is not connected to the Internet. Mobile data off, wi-fi off. And still (somehow or other) it manages to randomly connect itself to the World Wide Wubbish. It did so at half past two last night and started shouting with notifications about all sorts of stuff. Why didn’t it leave me asleep?

Over brekkie I watched an episode of “Trailer Park Boys” then had a look to see what my phone thought had been so urgent in the middle of the night. It turned out that there wasn’t much of note. There rarely is.
Mind you I did snigger when I saw one post on Facebook. Someone who used to live over the road from us was posting an ADHD awareness meme. She used to have the world’s worst-behaved brat who would periodically come over to play with "My Boy TM" when he was younger. When in his own home this brat would hang from the first-floor windowsills screaming, would sprint up and down the middle of the street… When he came to our house he was as good as gold because I told him we weren’t having any of his crap, and he respected that stance. He didn’t have ADHD at all; his mother had announced he had it as an excuse for not dealing with his bad behaviour. I used to see this when I was a cub leader; for every child that *really* did have ADHD, there was a dozen diagnosed by mothers who had ill-behaved brats.

With the car still in car-hospital I walked up the road to the railway station and was soon on the train to Barming. I found a copy of “The Metro” and occupied myself with the crossword. Half an hour passed rather uneventfully, and then a twenty-minute walk had me in work. I’d not been in at Maidstone for a couple of weeks; nothing much had changed. I did my bit, took a shortened lunch break, and skived off a few minutes early so I could get the earlier train.
The train home was marginally more exciting than the train to work. I found a discarded “Evening Standard” and had a go at its crossword. It was far trickier than that in “The Metro”. Did you know that a sabot is a wooden shoe? No? I didn’t either.
I must admit to having spent a few minutes watching a young mother giving her child a severe telling-off. The child’s crimes were the sort of things of which most children are guilty, but the mother was decidedly odd. She had exactly the same hair style as “Vir Coto” out of the sci-fi show Babylon 5. I wonder if she knew?

I arrived home at exactly the same time as "er indoors TM" and we walked the dogs round the park. It was a rather good evening for a walk. Usually Tuesday would see the clans gathering, but events conspired against that today, so we walked a little further than usual.

I wonder what’s for dinner…