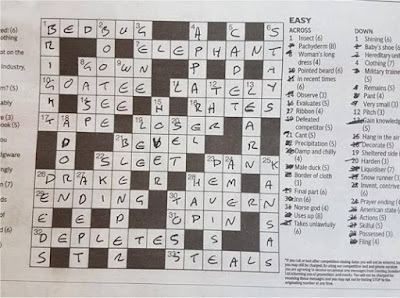 The night shift was.. It was OK really. Six years ago my professional circumstances were somewhat different; I never thought I'd be asked to do night work again. For all that I would rather not be up all night, there is something satisfying about being trusted to do the job unsupervised. It is only after that has been taken away (albeit only for a couple of years) that you appreciate it.

Usually after a night shift I would drive home and have my piss boil as I listened to the radio. But my car was in for repair this morning. With the relief arriving only seven minutes before the train was due to leave, and having the train station some fifteen minutes walk away, I took my time and went to the works canteen for brekkie.
As I queued up I found myself biting my tongue. The fry-up is self-service; how is it possible for someone to take ten minutes (I timed them) to put scrambled egg, beans, mushrooms and two sausages on to a plate?
It is my habit to check the Internet over brekkie; it is much easier to do this with toast and a lap-top than with a fry-up and a mobile, but I had a go.
One email made me sit up and take notice. I did say "fuksake" out loud, but I don't think anyone noticed. A few weeks ago there was an article on Radio Four all about just how poorly understood are the numbers and habits of the mammals of the United Kingdom. The public were asked to download an app to their phones so they could report sightings of mammals to enable the experts at the UK Mammal Society to figure out how much of what we've got, and where we've got it.
I was dead keen to get involved. And I did. But this morning whoever it is at the other end of the "mammals" app on my phone sent me an email. They have rejected the deer sighting that I logged on Monday because the location that the GPS on my phone gave them is "outside the known range of deer."
Seriously?
We saw the thing and I took a photo of it, and used the app to log the sighting. From the geocaching I'd been doing on that phone that day I know that the GPS is accurate to a couple of metres.
So... rather than learning from evidence and updating their database, the people at the UK Mammal Society are sticking to what they know, even if it is wrong. I must admit that sticking to what I know, even if it is wrong is the sort of thing that I tend to do. but then again I didn't go on Radio Four to launch a nationwide campaign that I then chose to ignore.

With brekkie scoffed I wandered down to Barming railway station and was soon on the train home. Yesterday evening on the way to work I'd picked up a discarded "Evening Standard" and this morning I had a go at the crossword. I had this idea that it would keep me awake on the way home, and I wouldn't wake up an hour past my stop finding myself in Ramsgate. After all, I've slept past my stop once or twice before. It was an idea which worked. I transmitted photos of my progress to Facebook, and several of us had fun doing the crossword.

I got home an hour later than usual after the night shift, and took the dogs round the park. We had a good walk; we didn’t have any untoward incidents (which is always a good thing). I video-ed the dogs running round the co-op field and posted it to Facebook, but it didn’t elicit much response. Photos on social media get quite a bit of attention; videos not so much.

I came home, and went to bed. I slept for a few hours until the garage phoned to say the car was ready. I took the hounds out again to collect the car. On Monday the nice man at the garage said that the parts alone would cost five hundred quid. Today I paid for the parts, the labour, a re-gassing of the air-con, and the VAT, and it came in at fifty quid *less* than the parts alone were supposed to have cost.
I’m not complaining.

It was good to drive home. Once home again the dogs settled and I spent the afternoon doing the ironing. Dull, but a job which needs doing. Just as I was finishing "er indoors TM" messaged to say she would be going out straight from work. Me and my dogs had kebab for tea…