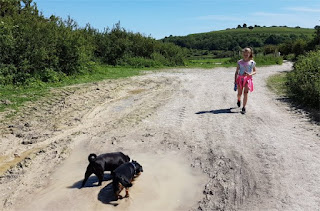 I woke feeling full of energy and raring to go only to find it was twenty past two. I hate it when that happens. I dozed on and off until it was time to get up. Despite not having been as good on the diet as I might have been over this last week I’ve managed to drop another pound.
As I scoffed my morning toast, Treacle came marching round the living room carrying one of "er indoors TM" slippers and looking very pleased with herself. She made a point of showing me what she’d stole, then ran off hoping to be chased. When I didn’t give chase she came back to show me what she’d got. Again I took no notice until she came close enough for me to nab it from her. She’s a bit thick like that.

We got ourselves together and set off at seven o’clock. In retrospect this was a tad late; I didn’t realise just how far we had to go. But we made good time, and despite one near mishap we were soon at McDonalds in the back of beyond where we met our accomplices for the day. Overnight the Visa credit card network had failed, but fortunately it was fixed by this morning; civilization hadn’t collapsed and it was sausage and egg mcMuffins all round. My dogs like sausage and egg McMuffns.

We set off to an obscure lay-by somewhere on the South Downs. It was a shame that our Brighton pals weren’t along, but I’d seen during the week that Basingstoke kite festival was in full swing today.
We soon got ourselves organized, got our extending leads on (those of us that have extending leads, that is) and we set off on a rather epic walk.
As we walked we saw birds of prey, we saw squirrels and rabbits and even a slow worm. We even saw some rather sweet baby birds, and one of our number managed to get one of the chicks in her mouth.

After five miles we found a pub. “The Gun” in Findon had a rather nice beer garden, and with a selection of Ringwood ales on the pumps we stayed for possibly two more beers than perhaps we might have done. But it was a warm day, and we did need to re-hydrate and take on fluids. Personally I turn my nose up at re-hydrating and taking on fluids; preferring to have a drink instead, but in my world you tend to go with the flow.
From Findon we walked up a gentle incline to Cissbury Ring where we had a spot of lunch. We’d made good time in the morning, but after three pints of re-hydration we were slowing somewhat. Mind you Cissbury Ring is a pretty place to be. We took a little twenty-seven cache diversion here, and it was toward the end of this section (whilst climbing the steepest hill of the day) that we lost Fudge. I say “lost” after a fraught five minutes he turned up. He was only a few yards away, rolling on something disgusting in the long grass.

Geocache-wise today was a mixed day. Having chosen to do two different series of caches (hidden by different people) interspersed by all sorts of random other ones it couldn’t help but be mixed. Mind you, several were puzzles in that their location was calculated from distances and bearings from a given point, and some of those were only found by the given hints; the co-ordinates on some were a little awry.

The plan for the day had been to walk on into Steyning for dinner, then back to the cars, but time was against us. So we made our way back to the cars and drove to The Star in Steyning. We’d sheltered from the monsoon here only a few weeks ago, and today Karl treated us all to a sport of dinner. My chorizo burger and Eton mess were some of the best ones I’ve ever had.

We said our goodbyes and set off homewards. We’d had a *very* long day. We left home at seven o’clock in the morning; we got home at quarter to midnight.
Not a bad day…