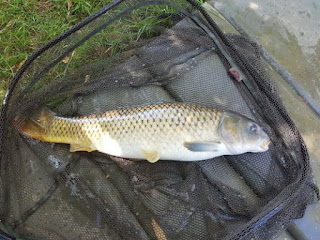 With an alarm set I didn’t sleep well, and was watching “Trailer Park Boys” before six o’clock. I’d loaded all the fishing gear into the car last night so that I would have a quick getaway this morning, but still I forgot stuff. I got dressed quietly, then just as I was about to leave I went back upstairs for my shoes. How can you forget to put shoes on?

I drove round to collect "My Boy TM", and after a quick McBreakfast (during which I knock a cup of coffee flying) we came home again to collect the sunglasses I’d forgotten. We’d planned to be at Hartley Lands fishery for half past seven; we were there before eight o’clock (just!).
"My Boy TM" had a quick recce and found a good spot to fish; we struggled our tackle to the lake (I *really* need a trolley!) and soon we were fishing. Regular readers of this drivel may recall that last Friday I went to the tackle shop. I spent a small fortune on special floats for today. They were absolutely rubbish; one is still in its packet and the other is up a tree. Regular readers of this drivel nay also recall that yesterday I went to Sainsburys to buy the secret ingredient for my never-fail secret bait recipe. I tried it today; it failed.
Eventually I figured out why the first fruit of my loin was catching fish and I wasn’t; having smaller bait and having a float I could actually see paid dividends. It was a shame it took me four hours to work this out.
But once I’d figured out the error of my ways I was soon catching fish like a thing possessed. The average fish we caught today was bigger than anything I’ve caught in Shirkoak or at Sam’s Lakes. I had several over ten pounds in weight, and one of today’s carp equalled my personal best in weight. In fact, since "My Boy TM" didn’t weigh his biggest fish of the day, I’m claiming that I had the biggest one.
I took a few photos as we fished. We’ve been fishing in several places over the last few years. I think Hartley Lands fishery is my favourite place. It isn’t busy mid-week, it is beautiful, and the average fish size is bigger.

After we’d been fishing for five hours some normal people arrived. Now… imagine the scene. You arrive for a day’s fishing. You look at the lake and see it is about three hundred yards long and about a hundred yards wide. You can see large carp coming to the surface all over the lake, and there are only four people fishing. You can fish absolutely anywhere you like so… where do *you* choose to set up?
Would you believe this idiot set up a few yards to my right?
We ignored him as best we could.

As the day went on my phone brought me messages from reality. My smallest grandson was in trouble; "Daddy’s Little Angel TM" phoned to say that "Stormageddon - Bringer of Destruction TM" had been in a minor ruckus at nursery in which one child got bitten. As the most recent fruit of my loin ranted that smallest grandchild had never fanged anyone before, I couldn’t help but think “not my circus, not my monkeys”.
"My Boy TM" also had messages. My granddaughter has a boyfriend. That will be good for some tears in a little while.

​Part of my wanted to stay fishing in to the evening, part of me (specifically the rather painful right elbow) thought it was time to call it a day; we packed up shortly after half past five. I came home to find that "er indoors TM" had taken the dogs out.
Once she was back we had fish and chips; she went bowling and I settled in front of the telly. I took some Malteser cookies fishing but didn’t eat them, so I scoffed them whilst watching telly. Last night’s episode of “Poldark” was rather good…