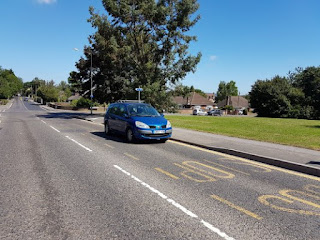 I slept like a log last night; the aftermath of a night shift is a wonderful cure for ongoing insomnia. I eventually emerged from my pit and over brekkie I had a look-see at the Internet. The edit I did on Wikipedia yesterday had survived; I’d had a message out of the blue asking if I could do something for a friend of mine. I was happy to do the edit on Wikipedia. It is easy enough to do, but more often that not, every time you change something on Wikipedia, someone else changes it back again.
With little of note on Facebook, and not even LinkedIn sending me an email, I took the dogs round the park.

As we walked along the path we had a rather nasty set-to with some stupid woman. She and her seemingly idiotic child were cycling along the path. Not on the bit clearly marked for bikes (with a bike painted on it) but on the bit for pedestrians (with a person painted on it). This obnoxious cow cycled straight at Treacle who was on the non-bike bit. She stopped and told me to put the dogs on leads. I told her where the cycle path was. In front of her kids she told me to f... off. I complemented her on the fine example she was showing her children.... and that's when it all got a bit nasty. The more angry she got, the more polite I got, and my being polite was *really* boiling her piss. In the end I wished her a good day, and I said that I hoped she didn’t go flying over her handlebars face-first into the tarmac. (That last bit was a lie, but I think she was too thick to spot the sarcasm)

We came home, and just as I’d loaded up the car with rubbish to take to the tip my phone beeped. There was a new geocache about half an hour’s drive away. So, thinking I had a few minutes to spare, I set off chasing the First to Find. I found it, and just as I was doing the top-secret geo-ritual my phone rang. It was "Daddy’s Little Angel TM". The nursery had phoned her to say that "Stormageddon - Bringer of Destruction TM" was ill. She was in Ramsgate – could I go get him?
I set off to the nursery; taking a rather convoluted route as the roads of half of Ashford are currently dug up. As I drove down Willesborough Road I was reflecting on "Stormageddon - Bringer of Destruction TM" being poorly and how you never know what will happen next in life.
It was at this point that my car stopped.

I say “stopped” – it didn’t actually stop as such; the engine stopped making engine noises and the thing just fizzled out and eventually came to a rest at a bus stop. I pressed the starter button. It made all the starter noises but didn’t actually start.
I phoned the breakdown people and spent a frustrating fifteen minutes being messed about by their automated switchboard. Eventually I spoke with someone who was helpful, and told me that a rescue vehicle had been dispatched.

I stood with my car watching the traffic jams that my breakdown was causing, and half an hour later rescue arrived. After a little farting around and my explaining the problems I’d had with the petrol leak in the car last week, the nice breakdown man had an idea. He explained how the fuel gauge in my car is computerised. It tells me how much petrol I have left based on my average fuel usage. Last week’s petrol leak wasn’t “average fuel usage”. He opened the car bonnet, squirted WD-40 into the fuel lines and asked me to start the engine. It started.
We went to the petrol station at Tesco, filled a jerry-can with petrol, took it back, poured it in the petrol tank and the car started instantly. I’d run out of petrol. Oh, how I chuckled.
I drove to Tesco and filled up with petrol; my car has never taken so much petrol before.
I eventually got to the nursery five minutes before "Daddy’s Little Angel TM" did.

The plan for the day had been to walk the dogs, do a tip run, a bit of shopping and to be working in the garden by ten o’clock. What with First to Finds and running out of petrol I was now three hours behind. I went to Tesco to get dog biscuits for Monday, and then to the fishing tackle shop to get a *huge* float. I then went to the tip and unloaded the rubbish, then popped in to Matalan to get some trousers.
It was nearly two o’clock by the time I sat down for lunch, and over an episode of “Trailer Park Boys” I remembered all the other shopping I’d forgotten to get.

I settled the dogs and went back to Tesco, where "Daddy’s Little Angel TM" phoned me. She’d taken "Stormageddon - Bringer of Destruction TM" to the doctor’s; he had a heat rash. It is odd how he comes home from that nursery with bumps and bruises that the staff there don’t notice, but the same staff lay an egg over a heat rash.
I came back home via B&Q; paint is expensive stuff.
Once home I ran out the hose pipe and started topping up the fish pond; a job I’d intended to get started at about ten o’clock this morning. By the time I’d mowed the lawn and cleaned the fish poo out of the pond filter it was gone five o’clock. I shall pressure-wash and paint another day.

Today was a rostered day off. I had planned to get so much done… God laughs when we make plans.