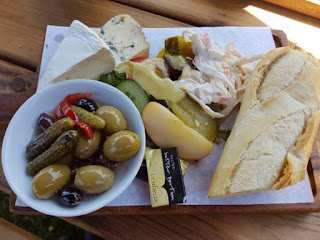 I was sleeping well until "er indoors TM"’s alarm went off at five o’clock. She’d set an alarm for last Saturday’s walk round Essex and hadn’t cancelled it. I didn’t get back to sleep after that.
I got up and watched an episode of “Trailer Park Boys” over brekkie in which Bubbles was having troubles with a Samsquanch. And with telly watched I had a look-see at Facebook. Some morning social media is interesting, some mornings it is fun… more and more though it is becoming attention seeking and racial hatred in equal amounts.

Yesterday I mentioned that I’d watched the film “Tau”; this morning Netflix emailed me to suggest I might watch it. Yesterday I also mentioned that I’d emailed Geo-HQ with a specific question. This morning they sent a standard email to which I replied asking that they might answer “yes” or “no” to the specific question I’d asked. I bet they won’t.

"er indoors TM" had plans for today so we said our goodbyes. I got the dogs into my car, seat-belted them in, and we all drove up to Heaverham. We’d arranged with the nice people at “The Chequers” to use their car park, and soon together with Karl, Tracey and Charlotte we set off on a rather good walk. The geo-series “The Heaverham Huff-Puff” is so named because of the huffing and puffing to get up the hills. We’ve walked in this part of the world before, and with "er indoors TM" elsewhere we deliberately chose to come here as we knew she wouldn’t like the hills.
It was a good walk; with one exception the footpaths were clearly marked (but we managed) and we only once found farm animals in any of the fields we had to cross. As we walked we saw buzzards circling in the sky, and the dogs smelled all sorts of things to get very over-excited about. Both Fudge and Rolo rolled in stuff; I’m sure Rolo isn’t allowed to roll in stuff when he is at home.
Geocache-wise it was a good walk. We had seen that two caches appeared to be missing; we’d contacted the chap who’d hid them and offered to replace them if we couldn’t find them. Both seemed to have gone; we replaced both. There are those in geo-circles who frown on that sort of thing; personally I wish more people would be helpful like this.

We’d promised the nice lady at “The Chequers” that we would repay their kindness in letting us use their car park; once back at the pub we got some drinks in and ordered dinner. I can’t recommend the place highly enough – they were so friendly and helpful. And the food was excellent. The ploughman’s lunch was *so* good. You could have two different cheeses, and ham or olives… the only fly in the ointment was when the waitress told me I was having the vegetarian option. I hadn’t considered it to be “vegetarian”.
We sat in the shade of the garden umbrella for over two hours. We had considered meeting later, having lunch first and walking in the afternoon. We were all glad we’d started early. It was warm enough in the morning; the afternoon would have been just *too* hot.
I took a few photos whilst we were out. I do that.

We came home; with "er indoors TM" off out I had to get my own dinner. I foraged in the general direction of the KFC fully expecting to share it with the dogs. But they were all fast asleep when I got back from the KFC. They all came over looking hopeful, and then all went back to beds and sofas and snored.
Perhaps it *had* been too hot for them today? But they had all had plenty of cold iced water as we walked, and plenty of water and shade in the beer garden. And all had been playing in the beer garden. I suspect that having Rolo along made the adventure more exciting for my two, and the adventure itself was fun for Rolo.
They were all still asleep at nine o’clock… not one had asked for dinner…