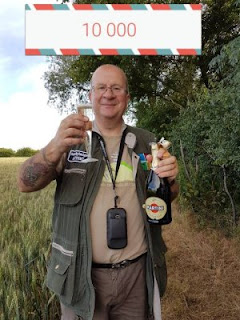 A rather early start this morning; up and about before five o’clock. It was such a shame that Treacle’s restless night had kept me awake for much of the night too.
Over brekkie I saw that my niece’s boyfriend had removed his rather inflammatory post that he’d put on Facebook last night. He’d put up one of these hate-filled English Defence League memes claiming that he was going to have to work until his mid-seventies to fund freeloading immigrant families. I suggested that he would be lucky to live till his mid-seventies as he was creating an atmosphere in which no immigrant families would want to come to the UK. And with no such immigrant families where would the UK’s hospitals get the pharmacists, physiotherapists, cleaners, cooks, biomedical scientists, podiatrists, speech therapists, cardiographers, dieticians, porters, secretaries, med lab assistants, biochemists and all the other jobs that the average Brit demonstrably cannot or will not do?
I’d told him off about this last night; he had never thought the matter through. He admitted (on reflection) that he had no personal experience of any immigrant families living high on the hog at tax-payers’ expense, but he did know of several who were all hard-working. He seemed to think that as this meme was on the Internet it must have been true.
Why do people persist in perpetuating these lies? Are they *really* that thick?

We got ourselves ready in good time, and were away by six o’clock. As we drove up the motorway "er indoors TM" remembered that the liver she’d been frying as a treat for the dogs (at half past five) was still where she’d left it. Woops!
It seemed odd just driving through the Dartford tunnel; the toll booths are long gone. Mind you it seems odd having to pay to use the crossing, but that’s a squabble for another time.
We were very soon at our agreed meeting point at junction seven of the M11 where we met up with Karl, Tracey and Charlotte and after a swift McBrekkie we drove to the car park of Epping tube station.

Today’s walk was following the Essex Way. Most of our walks are vaguely circular so we end up where we started. The Essex Way isn’t circular, so we took a taxi out to the twin churches at WIllingale (yes – twin churches!) and walked back to the cars. Half an hour in a taxi; twelve hours on foot.
How easy it is to write that!

The going was good; the route was mostly flat. There were a few slopes, but nothing you would really call a hill. As we walked we saw deer poo and watched a kestrel hovering over a mouse. After a minute he caught the mouse (poor thing). We saw a game of cricket in full flow, we found some channel rocks.
After five miles we found ourselves in the village of Chipping Ongar. As we were walking past the Royal Oak pub we thought we’d have a pint. If you ever find yourself in Chipping Ongar I can’t say I’d recommend the Royal Oak. For all that it was friendly enough I got the distinct impression that if you wanted a fight, the locals would be only too willing to oblige. And the beer selection… There was a sign saying “cask ales” but the woman behind the bar assured us that they didn’t do that sort of thing.
Mind you at least we managed to get a bottle of Old Speckled Hen. After ten miles we walked up to the Green Man pub in Toot Hill to find it was playing the worst music you’d ever heard (far too loudly) for some private party.
We rolled up to the Theydon Oak in Theydon Bois at seven o’clock spitting feathers…
As we were walking through Coopersale I popped in to the graveyard to see the grave of my great great great grandfather. It is kept in good condition; I wish I knew who was looking after it.
There used to be a series of geocaches along the Essex Way a few years ago. Three years ago we walked two of the sections. Looking back it seems that today we’d walked all of the old first section and half of the second. There is no denying that we ached as we arrived back at the cars twenty minutes before sunset.
It was a good walk – I took a few photos. But it had been a long walk.

Geocaching-wise it was an odd walk. The old Essex Way series of caches had all been put out by the same people; the current caches along the Essex Way are by several different people. As you walk a geo series you get into the mind-set of the hider. This wasn’t possible today. You would walk a mile or so of good, well-maintained caches, then a mile or so of finding several missing and those you did find in serious need of repair. Some had helpful hints and good GPS co-ordinates; some had (frankly) meaningless hints and were ten yards out.
But it was a good walk. And I found my ten thousandth find today. I’d taken along a bottle of bubbly to celebrate… It was after this when "er indoors TM" fell in the ditch.