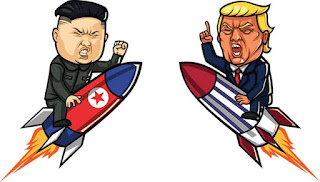 I slept well, but was still wide awake an hour before the alarm was due to go off. As I scoffed my toast I watched more “Trailer Park Boys” then had a look-see at the Internet. It was much as it always is… some people were posting political stuff that they didn’t understand, others were attention-seeking, others were posting pictures of cats… it’s the small things that make social media “social”; I love it.

As I drove to work I couldn't help but wonder why the road was so quiet this morning. Where had all the traffic gone?
As I drove the pundits on the radio were talking about President Trump's meeting with the North Korean leader Kin Jong Un. For all that the world seems to be impressed at what is being billed as a historic meeting, the details of the outcome of this meeting are vague in the extreme.

There was also talk of the upcoming World (football) Cup. This time video-referee technology is to be used for the first time at such an important event.
There's quite a bit of controversy about the thing. Interestingly it was mentioned on the radio that the Italians have been using this for a year or so and in this time the incidents of fouls, yellow and red cards in Italian football matches has dropped dramatically. It seems that since the players are being watched more closely, they are playing more nicely.

I got to Pembury and found where all the traffic had gone. Deserted roads in Ashford; heaving in Pembury.
I stopped off at Tesco for some supplies. In the past I've been unable to get into the Tesco at Pembury as schoolkids had blocked the entrance with their discarded bicycles. Today it was clear that someone had spoken with the schoolkids as the entrance was clear, and the children were all sitting on their bikes some twenty yards away, glowering at the customers going in and out of the supermarket.
I got some of what I wanted. But only some. I was running short on deodorant, but a tin of armpit-squirt which costs two quid in Tesco is eighty-nine pence in Aldi. I shall eke out what little I've got left and pong a little...
​
I got to work, and did my bit as I do. Over lunchtime I posted to Facebook and wished I hadn’t.
I really would like an old trolley for carrying my fishing gear from the car to the lakes when fishing so I wrote an advert and posted it to two "fishing stuff for sale" Facebook pages. One immediately rejected it as contravening Facebook standards because I was selling banned items such as "animals, guns and illegal items" (!). The other ran the advert, and within minutes I had some chap from Deal trying to flog me a second-hand trolley for fifty quid. Fifty quid! - I can get a brand-new sack barrow for half the price from B&Q.
I told him as much and he got the hump.
What is it with fishing gear? Mind you it's not just fishing gear - it is pretty much everything. You stick a designer label onto whatever you are trying to flog, and the punters queue up to pay over the odds. This trolley I'd been offered was of the "Preston" brand and apparently is well worth fifty quid, even if you *can* get something that does exactly the same job for less than half the price.

Being Tuesday the clans gathered. Today we were at Chippy’s new home. He certainly seems to like living upstairs… This evening was good – it made up for the rest of the day being on the dull side…