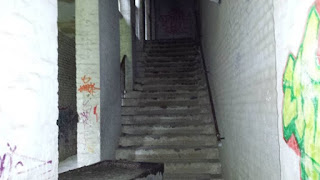 I woke finding myself in a rather awkward position hanging off the edge of the bed. An alliance of "er indoors TM" and the hounds had captured most of the bed.
Over brekkie I watched an episode of “Trailer Park Boys” – it is the sort of show that people will instantly love or hate. I rather relate to it. With nothing much happening on Facebook, and no emails of note I set off to work.

Being up and about earlier than I might have been and bearing in mind those traffic lights at Goudhurst, I set off to work earlier that usual.

Overnight I'd seen that the geocache that I spent twenty minutes hunting for on Monday had been replaced so I took a little detour to the back of beyond and soon had the thing in hand. If nothing else it broke up what can sometimes be a dull and tedious journey.

As I drove the pundits on the radio were talking about a strange quirk in UK law which puts landlords in an impossible position. The government's new immigration policies require landlords to demand that potential tenants show evidence that they aren't an illegal immigrant (should there be the slightest suspicion that they might be) before renting them accommodation. Obviously this is leading to landlords wanting only to rent to people with a British passport which is (apparently) discriminatory against those who might well be an illegal immigrant. Furthermore the act of asking for evidence that someone isn't an illegal immigrant can be used as evidence of such discrimination, and may well land the landlords in court.
You really couldn't make this up, could you?

I got to work far earlier than I might, and read my Kindle app for a while before I started. The book of "Game of Thrones" is making a lot of sense out of what was a very confusing TV show.

As I worked today I was thinking about something I read on Facebook last night. Yesterday I'd seen that the Citadel in Dover was up for sale. We went there once when Fudge slipped his lead (!) and I'd had this idiot idea about forming a consortium to crowdfund and buy the place and make something of it but chatting with a colleague this morning made me realise the folly of this idea.
A chap with whom I work has recently taken up a voluntary position on the committee of a local golf club and is wishing he hadn't. He is being inundated with petty gripes and whinges from other people associated with the club. Even as we spoke his mobile beeped with whines about golf-club trivia.  ​
I can sympathize with him. Over the years I've held various voluntary positions myself. In the Scout association, in sci-fi fan clubs, in the local association of snake-herds, amongst those that fly kites, in the astronomy club...  no matter what I tried to do to be public-spirited, there was never any shortage of people wanting to tell me what I was doing wrong and to suggest what I might have done better.  And my co-worker has found the same. All of the complaints he has been receiving recently start with "why don't you..." and "can't you...".  Everyone starts off with what "you" could be doing; it is never "we".
He's also found (as I did) that there are quite a few people who delight in throwing metaphorical rocks at him and being rather nasty purely because of the position he's taken up. There really are people who do this simply because they honestly believe that is what you are supposed to do to people who've taken up these voluntary roles.
Like me, he's got off his arse to do something that most other people simply won't do, and like me he's beginning to regret it.
Again it is sad proof of the two hundred and eighty fifth Rule of Acquisition... no good deed ever goes unpunished.

But just think what we could achieve *if* we bought the Dover Citadel...