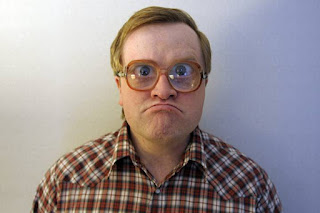 I was sleeping *so* well when Treacle went mental in the small hours in response to new-next-door’s dog going equally mental. Finding myself awake I went to the loo and tripped over Fudge who was sprawled out on the bedroom floor.
I was awake for much of the rest of the night…

I scoffed my brekkie whilst watching more “Trailer Park Boys”. In today’s episode out heroes were making a mucky DVD. I say “making”; failing to make was closer to the truth. “Trailer Park Boys” is excellent – there’s *so* much on Netflix. In a few short months I’ve binge-watched “The Mighty Boosh” “Still Game”, “Lost in Space”, “The Crown”, “Plebs”, “Peaky Blinders”, “F is for Family”, “Red Dwarf”, “Star Trek”, “Big Mouth” … all for less than a tenner a month.

Amongst this morning’s emails was one concerning a geocaching trackable of mine. A couple of years ago I won a rubber chicken in a raffle. I stuck a geocaching trackable tag on it, took it to the New Year’s Day geo-event I organized at the beginning of 2016, and then tracked the thing’s movements. It travelled some one thousand five hundred miles along a rather tortuous route to Corfe Castle where it was picked up by some French people and was never heard from again…
Until this morning.
I messaged the people who’d taken it from Corfe in mid-March. They finally replied to my message overnight. Yes – they had picked it up. They’d lost it but found it yesterday.
Flushed with success I might just release some more trackable items.

As I drove to work I found myself being rail-ended by a van from the T Kirwan company (whoever they are). I've mentioned before that if you are planning to drive like an idiot it is best not to do so in a vehicle with the company's name emblazoned all over it.

As I went along the A28 I listened to the radio. The pundits were discussing the revelation that those who regularly go to church live (on average) six years longer than those who don't. On the one hand this could be evidence that the abstemious pious lifestyle is better for you. On the other hand it could be proof that Big G doesn't want that sort of do-gooder cluttering up His Heaven.

There was also a lot of talk about how the Government is planning to restrict immigration laws so's that foreign doctors and nurses will be exempt from being sent back on the next banana boat in order to alleviate the staffing crises in hospitals. Whilst doctors and nurses are to be allowed to remain in the UK (and encouraged to come here), no mention was made of physiotherapists, pharmacists, cardiographers, radiographers, biomedical scientists and everyone else who works in a hospital. Mind you there rarely (if ever) is mention of all those types. However there was a *lot* of talk about why the UK is dependent on foreign medical staff whilst the rest of the countries of the world seem to recruit medical staff of their own nationality. I can't help but think the average Brit listens to the news and sees just how keen the other average Brits are to sue anyone working in a hospital, and consequently wants to drive a train or sell burgers for less aggro (and quite often more money).

I had a rather busy day at work, and drove out into one of the worst traffic jams I’ve had on the way home from Pembury. After forty minutes I was still only three miles from where I’d started.
Once home "er indoors TM" boiled up a rather good bit of dinner and went off to craft club. I watched this week’s episode of “Gotham”.
I really need to write up more CPD in a minute… Or I might have a kip…